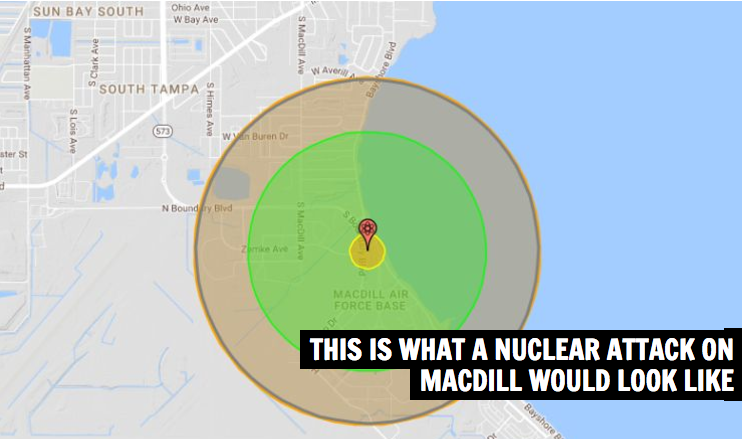 This morning the Tampa Bay Times posted an extraordinary front page article headlined "This is what a nuclear attack on Macdill would look like," with an image of a blast radius over the Macdill Air Force Base and the Tampa Bay area.

This is the definition of irresponsible fear-mongering.

Times staff writer Howard Altman goes into incredible detail on the intricacies of what exactly would happen if a 20-kiloton nuclear device exploded over Tampa.

Relying on expert advice and a website that allows users to pick a target and generate a model of a nuclear explosion's impact, Altman spares no details:


The blast — roughly as powerful as the "Fat Man" bomb dropped on Nagasaki on Aug. 9, 1945 — would leave a 100-foot deep crater at the epicenter with a radius of 170 feet. The headquarters of U.S. Central Command and U.S. Special Operations Command would likely be destroyed or heavily damaged. Nearly everyone within a half-mile of the explosion would be killed immediately. Nearly a mile out, 80 percent of the people would die from radiation poisoning, with death taking from between several hours to several weeks. Radioactive fallout would spread, driven by winds, sickening thousands, who would see their cancer risks increase over time as a result.

All of this, of course, is in response to our rising tensions with North Korea and President Trump's ill-considered "fire and fury" comment on Tuesday.

While speaking at his golf club in Bedminster, New Jersey, Trump warned that if North Korea continues with its nuclear and missile tests, these actions would be “met with fire and fury and, frankly, power the likes of which this world has never seen before.”

He even reiterated his point this morning in a tweet.

Yes, North Korea has multiple nuclear weapons and it also would appear they now have the capacity to lob an intercontinental ballistic missile to the eastern shores of the United States, but not Florida.

Altman actually points this out:

"Experts agree a North Korean attack on MacDill — or any site in the U.S. — remains highly improbable at the moment. The North Koreans still aren't believed capable of accurately delivering a nuclear warhead. And while their Hwasong-14 ICBM can reach the east coast of the United States, it can't yet reach Florida, according to nuclear weapons expert Karl Dewey of Jane's by IHS Markit."

These headlines about the United States getting nuked aren't informative; they're dangerous. Really, all they do is generate clicks.

But the Times isn't alone. NBC News actually ran a piece called "What Should You Do in Case of Nuclear Attack? ‘Don’t Run. Get Inside,’" and The Sun even published a piece called "How you can prepare for World War Three and what to do if there’s a nuclear attack – the official survival guide."

First off, relax. We're not getting nuked.

Sure, war could break out. Anything can happen. But as Zeeshan Aleem pointed out in a thoughtful post for Vox, the assumption that Kim Jung Un is an irrational madman with his finger on the button is inaccurate and makes little to no sense. "Attacking the U.S. with a nuke would seem completely reckless, since it would almost certainly ensure North Korea’s eradication in retaliatory strikes," writes Aleem. Most importantly, the No. 1 priority of North Korea’s leaders is to remain North Korea’s leaders. Firing off a pointless nuke at a base in Tampa would only cement their demise.

The good news is that members of Trump's own cabinet have since protested his supposedly off-the-cuff Tuesday comments. Secretary of State Rex Tillerson said "Americans should sleep soundly." Allies and members of Congress have also pushed back.

But when media outlets repeat the narrative that we're all about to get swiped off the Earth by a leader whom John McCain once called "a crazy fat kid," this only gives our unhinged president more impetus to launch a foolishly risky pre-emptive first strike.

As Medhi Assan pointed out for The Intercept, Trump is the one "who has the sole, exclusive and unrestricted power to launch almost 1,000 nuclear warheads in a matter of minutes, should he so wish."

Perhaps we should stop suggesting that he should.