Topping a recent bill of particular note were a couple well-regarded Athens bands. The first was Easter Island, who’ve impressed here before and continue to do so with a lavishly furnished indie-pop sound that’s gentle but large. Their music is a thing of sculpture and layer, unfolding like a ride through twilight clouds.

The other Athens act was Oak House, a trio that comes with lots of Radiohead comparisons that are not without merit. It’s due mainly to their defiance of stylistic convention and singer Gresham Cash’s markedly anguished Thom Yorke ways. But, at least live, they’re far less prone to wandering indulgence than the overrated kings of brood rock.

Instead, Oak House flex muscle and wire to keep things more pointed and incisive, constantly pushing a nervy edge that will sometimes just give in and burst into a maelstrom that’s heady, complex and charged.

Among the local openers was Expert Timing, a trio that’s been rising in the ranks over the past year or so. Clear disciples of melodic ‘90s indie rock, they deal in bright, feeling female-male vocals that ride big, chunky guitars. It all amounts to a substantial simplicity that makes them an immediate charm. 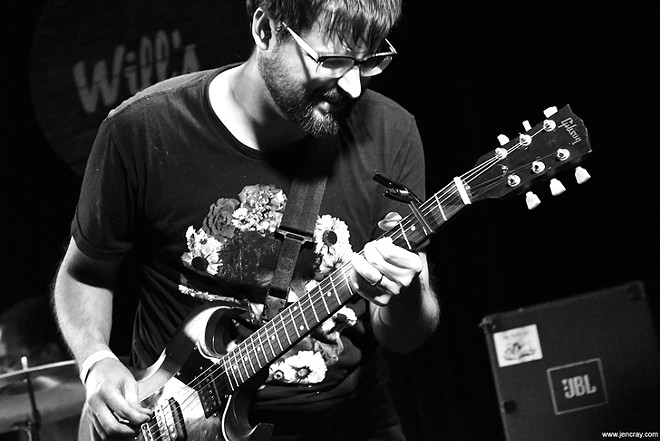 Also opening was Someday River, an indie-pop band previously known as Bellows – the one from Orlando, not the Brooklyn one I recently reviewed. Luckily, their name change several years ago was just the beginning of their journey into their own. They’ve come a good way since I saw them a couple years ago and an absolutely extraordinary way since their unfocused early days as Bellows, when I ravaged them a bit.

Today, they’re a trio capable of a whole lot of sonic depth and atmosphere with a tall, dreamy indie-pop sound. More importantly, their taste has tightened and sharpened notably, shedding much of their more pedestrian tendencies. Like Lord Huron refracted on the rays of the Florida sun, their solidly anthemic sense has the ability to make crossover indie rock convincing. Nice to see a homegrown band finally find sure footing.