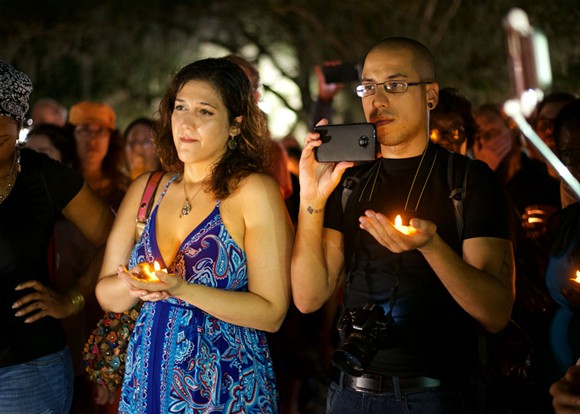 The place that used to be the site of Orlando’s Confederate monument at Lake Eola became a gathering space Sunday night as more than 100 mourners held a vigil for those killed during a white supremacist rally in Charlottesville.

The Orlando vigil was one of many vigils held across U.S. cities after the bloody violence in Virginia last weekend between white supremacists, Neo-Nazis, Ku Klux Klan members and other far-right groups against anti-fascists and anti-racism activists. Officials say Heather Heyer, a 32-year-old paralegal, was killed and at least 19 were injured when alleged white supremacist James Alex Fields reportedly rammed his car into a group of protesters. Two Virginia state troopers were also killed during the rally in a helicopter accident for reasons yet unknown. President Donald Trump was highly criticized for condemning violence on "many sides" in Charlottesville instead of directly naming white supremacists.

Carrying a banner with the words "Orlando says no to racism, misogyny, transphobia, homophobia, xenophobia, ableism," protesters in Lake Eola Park walked from the bandshell to where the "Johnny Reb" statue stood before it was disassembled in June.

Robin Harris, an Orlando activist, told the mostly white crowd that many times, black people and other people of color don't show up to these vigils because they battle overt acts of white supremacy and the subtleties of racism every day.

"Sometimes it’s offensive when you cry about what we’ve been crying about for over 500 years," she says. "Our kids are right now being beat and put in Orlando jails, Orange County. Where are we then when they were put in jail, and it’s not they’re fault. Where are we standing then? Where are we marching then when unfair things happen to our kids right now?"

Charlottesville is a mirror of what’s brewing locally, Harris says, and the fight against white supremacy must be lead by people who understand the "language of oppression."

"True solidarity is allowing those who are oppressed to lead the way," she says. "Please don’t try to temperament my anger because if I want to be angry, guess what, I’m gonna be angry. If our young people wanna say 'Fuck the police,' let them say 'Fuck the police.' … If you want to learn how to be in true solidarity, go and sit down somewhere and listen to those that have been through this. Come and feel my heart beat. Come and look at the bruises on our heads. And then, and only then, can we really march in solidarity."

Toward the end, T.J. Legacy-Cole asked attendees how many of them had been to a Black Lives Matter rally attended by at least a thousand last year.

"I ain’t seen a lot of you," he says. "You waited. So, injustice anywhere is a threat to justice everywhere. But you waited until it came to your doorstep, and now it’s in your face. See, what happened in Charlottesville we see all the time. It’s called being woke."

Legacy-Cole says people need to challenge the system of white supremacy that pervades in America, from the criminal justice system to employers. It's not enough to march in Parramore or Pine Hills – people must also be willing to confront racism in Winter Park and Windermere.

"You are a part of the problem if you see African Americans or people of color on your job and that are being discriminated against, and you don’t say nothing," he says. "Walking around in circles, we did that in the ’60’s and we got left high and dry. We have voter suppression in our communities right here in Orlando. So what are you willing to do? The choice is yours." 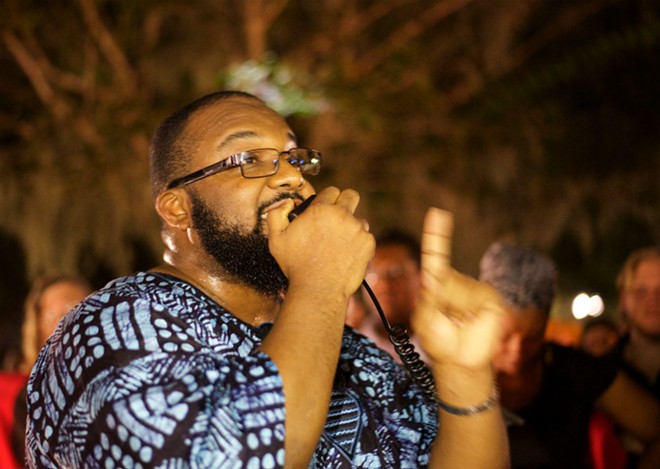