Get to know your Orlando-area hate groups 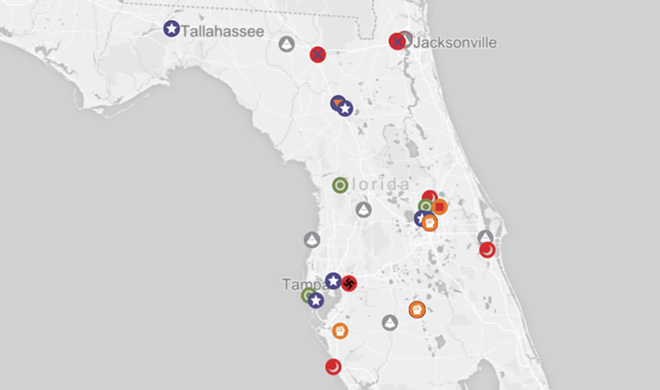 Florida currently has the second most active hate groups in the nation, and the Orlando area is home to more of them than you were probably aware.

The Southern Poverty Law Center recently released a "Hate Map," where users can easily scroll around the country and find out if a hate group is in their backyard.

According to the report, since 2015, the nation has witnessed a 197 percent increase in anti-Muslim groups, and there are currently 683 anti-government "patriot" groups.

In total, the U.S. has 917 hate groups currently operating within its borders, with 63 here in Florida, which is the second most in the country behind California (79).

Anti-Muslim group holding pro-Trump rally at Lake Eola in September
By Colin Wolf
Blogs
In the Orlando area we have quite a few, as well.

Here's a quick list of groups who, as defined by SPLC, "attack or malign an entire class of people, typically for their immutable characteristics."
From the SPLC:


The SPLC has documented an explosive rise in the number of hate groups since the turn of the century, driven in part by anger over Latino immigration and demographic projections showing that whites will no longer hold majority status in the country by around 2040.

The rise accelerated in 2009, the year President Obama took office, but declined after that, in part because large numbers of extremists were moving to the web and away from on-the-ground activities.

In the last two years, in part due to a presidential campaign that flirted heavily with extremist ideas, the hate group count has risen again.

The Hate Map was compiled using the groups' own publications and websites, police reports, and news reports.