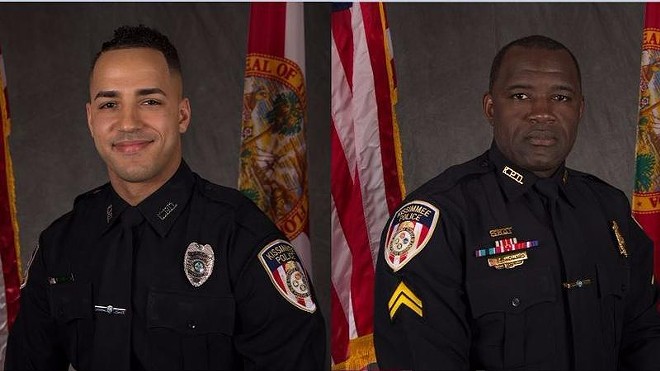 A second Kissimmee Police officer died from his injuries Saturday afternoon after a fatal Friday shooting claimed the life of another officer.

The Kissimmee Police Department says Sgt. Richard "Sam" Howard and Officer Matthew Baxter were shot during a routine stop near the intersection of Palmway and Cypress streets around 9:30 p.m. on Friday. Investigators say Baxter stopped Everett Miller, 45, and two other men for suspicious activity. Howard was in the area and responded to Baxter’s call for backup. The exchange took a violent turn after a scuffle of some sort and police allege Miller opened fire on Baxter and Howard. The officers didn't have a chance to return fire, and Baxter was pronounced dead shortly after the shooting, while Howard died hours later at Osceola Regional Medical Center.

The Orlando Sentinel reports police arrested Miller, a Marine Corps veteran, at Roscoe’s Bar, 2344 N. Orange Blossom Trail, on Friday night and took him to the Osceola County Jail in Baxter's handcuffs. Miller has been charged with first-degree murder, resisting arrest and carrying a concealed weapon. Kissimmee Police say they are still looking for a person of interest named Maribel Gonzales King. King is not a suspect in the crime, but she does frequent the McLaren Circle area, and officers would like to speak with her.

"I am so proud of the sworn and civilian members of our Department by acting quickly to identify the suspect and bring him to justice," says Kissimmee Police Chief Jeff O'Dell in a statement. "We will mourn over the next few days. … We will get through this and we love them for what they do."

The City of Kissimmee has also set up a bank account through SunTrust for those who would like to donate to Baxter and Howard's families. The account is titled, "City of Kissimmee – Officer Matthew Baxter and Sergeant Sam Howard," and donations can be made at any SunTrust Bank starting on Aug. 21.