In an effort to nudge the president toward marijuana reform, Orlando attorney and probable Democratic gubernatorial candidate John Morgan recently joined forces with Roger Stone, a man under scrutiny by the FBI for colluding with the Russians to help the Trump campaign.

Last week, the two buds released an announcement from the United States Cannabis Coalition, calling for a bipartisan effort to put pressure on Trump to honor a pledge he made in 2016 to support the states' right to legalize medical weed, and to change the classification of marijuana from a Schedule 1 drug to Schedule 2.

"All Americans can and should come together to stop the war on marijuana. It can no longer be a Schedule 1 narcotic. Pain, disease and mental illness don’t pick political parties – just people. This is the perfect issue for ‘strange bedfellows’ to come together on and WIN," said Morgan in the announcement.

While Morgan's positions on marijuana are vastly popular with the majority of Floridians and marijuana advocates, Roger Stone is not. 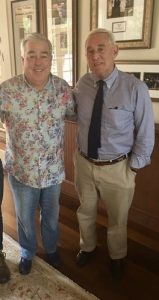 Morgan's friends in the weed industry have been quickly and loudly distancing themselves from Stone. Last week, the Minority Cannabis Business Association  pulled out of the upcoming Cannabis World Congress & Business Expo, where Stone is scheduled to speak.

On top of that, a recent petition – backed by well-known figures in the marijuana movement – is asking the cannabis community to unanimously #DisownStone.

The petition also cites a few of his many sexist, racist and homophobic comments and tweets.


Tweeting that commentator Roland Martin is a "stupid negro" and a "fat negro," commentator Herman Cain is “mandingo,” and former Rep. Allen West (R-FL) is an "arrogant know-it-all negro." He also tweeted that commentator Rev. Al Sharpton is a "professional negro" who likes fried chicken, asked if former Republican presidential candidate Ben Carson was an “Uncle Tom,” and referred to himself as a “n*gga” with a Nixon tattoo.


Stone tweeted that New York Times columnist Gail Collins is an "elitist c*nt," MSNBC host Rachel Maddow is "Rachel the muff-diver," Fox News’ Megyn Kelly has a "nice set of cans,” and Rep. Debbie Wasserman Schultz (D-FL) is a “jap” (acronym for "Jewish American Princess") who is “every man’s first wife.” He also tweeted "DIE B*TCH" at former New York Times executive editor Jill Abramson, and said he would kill himself if he was married to “screechy” and “shrill” Carly Fiorina. The Sun Sentinel also reported that Stone called Florida politician Barbara Stern a “self-important, nasty c*nt” on Twitter.

It would appear that none of this has swayed Morgan to distance himself from Stone. Earlier this week Morgan stated that denouncing Stone would be a "mistake" and that he's an "asset to this movement."

"It's a mistake. Roger has the president's ear," said Morgan to Politico. "Politics is not pretty. Sometimes politics makes strange bedfellows. This is such a time. With the stroke of a pen Trump could make MJ Schedule 2. And it would be right and his ratings would soar."

Yesterday, the attorney doubled down on this stance and tweeted that Stone has the "best chance" of influencing Trump.

Those are the cards dealt. So play or don't play.

So essentially, according to Morgan, if you want to get stoned then you have to get Stoned. What a buzzkill.