Apopka preacher Paula White, who gave Tuesday's invocation in front of the Orange County board of commissioners meeting, recently appeared on a televangelist program where she said defying President Donald Trump was akin to "fighting against the hand of God."

Without specifying how big that hand might be, White said God was responsible for Trump's presidency on a television show hosted by Jim Bakker, a disgraced televangelist convicted of fraud who has been telling people that Christians will start a civil war if Trump is impeached.

"He’s not a polished politician," White told Bakker. "In other words, he’s authentically – whether people like him or not – has been raised up by God because God says that He raises up and places all people in places of authority. It is God that raises up a king, it is God that sets one down and so when you fight against the plan of God, you’re fighting against the hand of God."

Oh, but there's more! White claims "demonic spirits" are directing hatred toward Trump because they're afraid of who he will appoint to the U.S. Supreme Court. 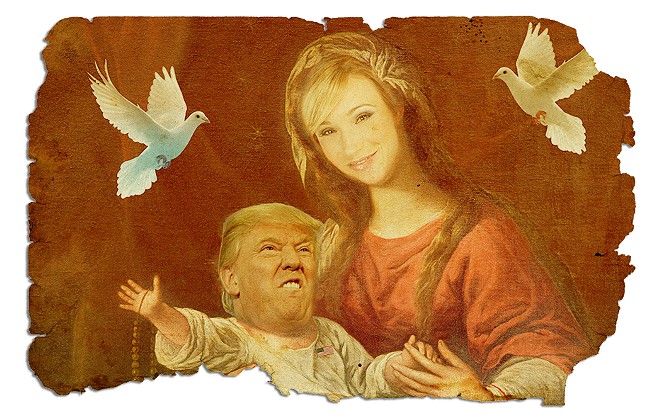 "We’ve got 130 vacancies in the lower courts and he is appointing exactly what we have asked for, why we put him in position as the president," she said. "We said we will put you in because we want originalists, we want constitutionalists, we want our Supreme Court to be like Neil Gorsuch. … If we get two more – c'mon, if we get two more – and right now, I know we are scaring the literal hell out of demonic spirits by me saying this right now, because if we get two more, we will be able to overturn demonic laws and decrees that have held this nation in captivity."

So if you're feeling a tingling sensation right now and happen to support same-sex marriage or abortion, it's not gas, people – it's Satan.

White, who's known as Trump's "God whisperer" and chairs his evangelical advisory board, leads a congregation of 10,000 at her predominantly African-American megachurch New Destiny Christian Center in Apopka. There she preaches the controversial "prosperity gospel," which believes God makes the most faithful rich and involves White asking her followers for money. White has reportedly amassed a small fortune in cash and properties through various now-bankrupt ministries and at one point was investigated by the IRS and the U.S. Senate Finance Committee, though no wrongdoing was found.

Needless to say, White's comments caused some controversy and she was thoroughly read by TV host Roland Martin.