DieAlps! land with defining new album and max out Florida bill with Kinder Than Wolves, Expert Timing and Woolbright

Pairing both locals and other in-state talent, this recent bill was a strong showcase of current Florida indie rock. Among the two good locals was Expert Timing, a band whose virtues I’ve extolled recently and who are such a joy that you’d have to be one seriously miserable malcontent to not be taken by them.

The other was Kinder than Wolves. Moody, intricate and layered, their thoughtful indie rock is like dreampop reimagined for a new generation. With an arrangement of drums and dual guitars, they weave a lot of texture for just a trio. Together, it renders a lovely world that’s forever twilight and suspended in reverie.

The imported Florida contemporaries included South Florida’s Woolbright, who play an angular, restless brand of emo that buoys the heart bleed with some nice math dynamics. By set’s end, they even went for some big post-rock size. 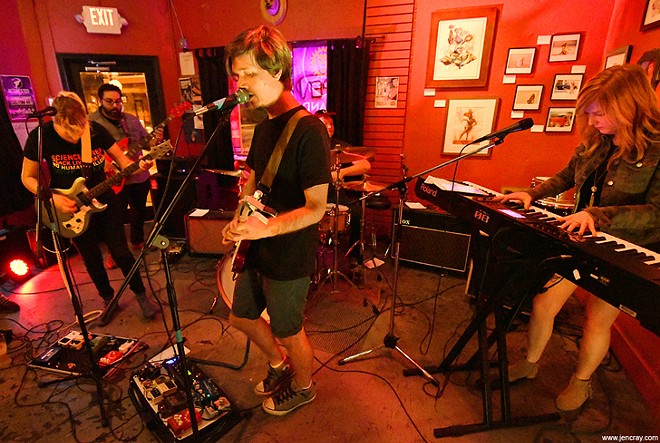 On paper, though, probably the most eminent band was Tampa’s DieAlps!, who arrived on the fresh release of their debut full-length album Our City. Some records are a defining point in a band’s life. And, though still quite young in their creative arc with only two releases under their belt so far, this new album is unquestionably the first lightning bolt moment for DieAlps!. Our City isn’t just an expansion of sound but a crystallization of aesthetic. With it, they’ve become probably the most exciting, complete and upward act on top Florida indie label New Granada Records right now. 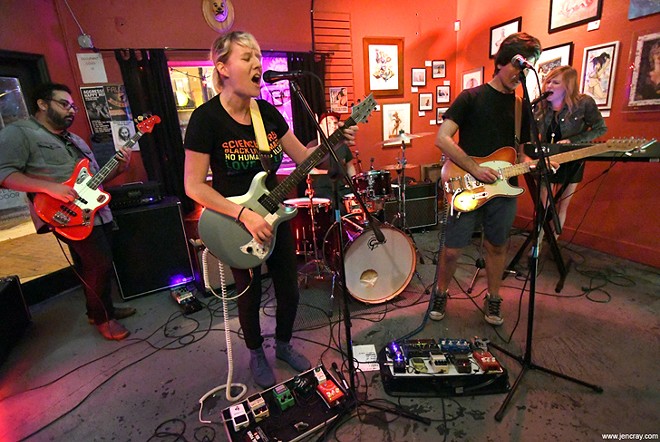 The album is radiantly cast in the golden rays of ‘90s melodic indie rock, with echoes of bands like Teenage Fanclub (and, by extension, Yuck), Catherine Wheel, Bettie Serveert and early Radiohead but without being slavish to any one in particular. Most fundamentally, however, their current direction derives its spark and vigor from the greater, more balanced chemistry within the creative core of wife-husband team Connie and Frank Calcaterra. The reaction is a sound of more sweep, muscle and realization. And, here, DieAlps! played like a big, unified front. This is the sound of a band now firing on all pistons.

It was, in all, one of the most loaded bills to happen at the small art bar in some time, and the turnout reflected it.