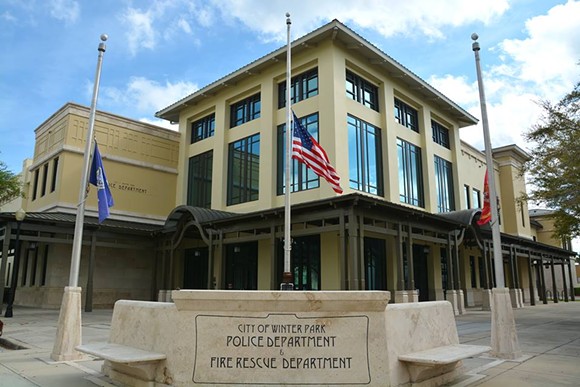 Winter Park commissioners voted against equipping its police officers with body cameras because they don't want the city's public safety to become a "political football."

The Orlando Sentinel reports Winter Park Police Chief Michael Deal wanted the cameras for his officers and put a request in the 2018 fiscal budget. But the Winter Park City Commission voted against the body cameras twice, with Vice Mayor Pete Weldon saying in July, "Just as a policy matter, I can’t support the cameras. I want the best public safety of anybody in Central Florida, but I don’t want our public safety to be a political football."

Study by USF and Orlando Police suggests body cameras improve police work
By Monivette Cordeiro
Blogs
We're pretty sure the transparency of body cameras for both officers and residents isn't partisan, but OK. It wouldn't be weird for Winter Park Police to not have body cameras if almost every other law enforcement agency in Central Florida were following their lead. But they're not – the Kissimmee Police Department just got 80 cameras for its officers, while the Orlando Police Department is going to pay Motorola $4.5 million for 450 cameras for its first responders. In 2015, 46 OPD officers participated in a University of South Florida study that showed body cameras may have helped reduce resistance incidents and external complaints.

The Sentinel reports Chief Deal says he and his department are fine without the cameras because during his short tenure, there have been no complaints so far of excessive force or racial profiling.