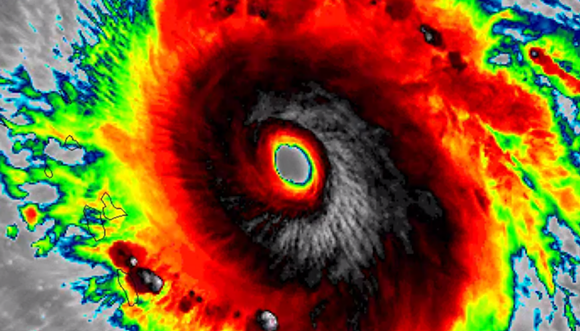 With sustained winds now at 185 mph and gusts up to 220 mph, the National Hurricane Center confirmed today that Hurricane Irma is now the strongest Atlantic storm ever recorded outside the Gulf of Mexico and Caribbean.

The latest advisory report from the NHS, also shows the Category 5 hurricane is on pace to break the record for hurricane wind speed (which is currently set at winds of 190 mph).

While the exact formation, forecast and path will likely change in the coming days, Irma is currently moving west at 14 mph, and is expected to make contact with the Leeward Islands today.

#Irma is the strongest #hurricane in the Atlantic basin outside of the Caribbean Sea & Gulf of Mexico in NHC records https://t.co/tW4KeGdBFb pic.twitter.com/P8ebbQJR4k

According to the NHS, "there is an increasing chance of seeing some impacts from Irma in the Florida Peninsula and the Florida Keys later this week and this weekend." Earlier today, a mandatory evacuation order was issued for everyone in Monroe County, which is located in the Florida Keys.

Parts of Southern Florida are now in the five-day forecast track cone, with Central Florida still in the cone of uncertainty.

On Monday, Florida Gov. Rick Scott declared a state of emergency for all 67 counties and has activated all 7,000 members of the state’s National Guard to report to duty this Friday.

The eye of a category 5 hurricane. #Irma #GOES16 pic.twitter.com/eATVZspJZx