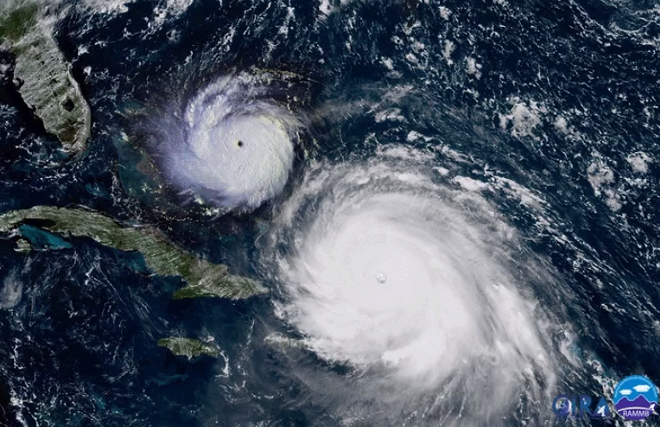 On Wednesday afternoon Florida Gov. Rick Scott said that Hurricane Irma is "bigger, faster and stronger" than Hurricane Andrew, the massively devastating Category 5 hurricane that rocked The Sunshine state in 1992.

"Hurricane Andrew is one of the worst storms in the history of Florida," said Scott. "This is much worse and more devastating on its current path."

As you can see the in the picture above, he's not kidding.

For a sense of scale, meteorologist and contributing writer at Grist, Eric Holthaus, scaled images of the two Category 5 hurricanes and the comparison is staggering...

I combined the images of Hurricane Andrew (1992) & Hurricane Irma (today) at scale in a gif. Irma is a damn leviathan. pic.twitter.com/4HEw1NNxxd

Here it is compared to the U.K.

How large is #Irma? So large that it would cover the entire UK and part of Ireland pic.twitter.com/HtiXWlHwsq

Remember, Andrew was one of the most destructive hurricanes to ever hit Florida. The storm left 65 people dead, destroyed more than 63,500 houses, damaged more than 124,000 others, and caused $26.5 billion in total damages.

So far, Irma could very well be much much worse. As the 180 mph storm currently moves west through the Caribbean, ten people have been reported dead and entire islands have been leveled.

Though the exact track is still uncertain, Irma is projected to reach Central Florida by Saturday night.

Prepare yourself for this storm.