Turns out one of the Gainesville 'Hot Cops' is a dick 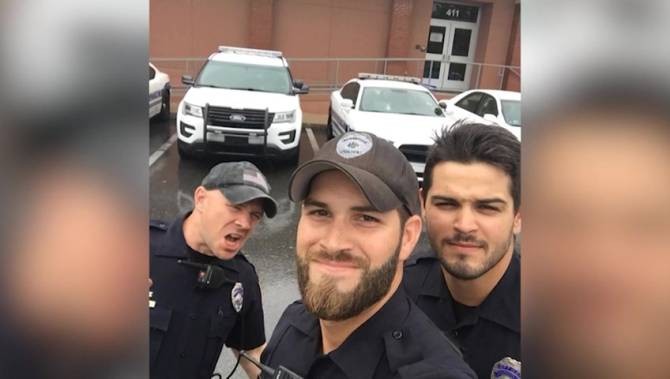 One of the Gainesville "Hot Cops," whose selfie went viral last weekend after Hurricane Irma, is the subject of an internal investigation after Facebook posts show he has a propensity for Hitler jokes.

Officer Michael Hamill, the bearded one, is being investigated for posting anti-semitic comments to his Facebook page, reports The Gainesville Sun.

In a post from 2011, Hamill writes: "so I find it funny that people will talk about how our government needs to do something about our economy and in reality it’s YOU who needs to stop taking advantage of our system and get a life and do something with your life. Gotta love reality when it hits you in the face. Stupid people annoy me. Put them in an oven and deal with them the Hitler way. Haha."

In another post, Hamill writes, “Here is one for everybody, 'What’s the difference between boy scouts and Jews?' anybody know? well it is because ‘Boy Scouts come back from their camps.'"

"Who knew that reading jewish jokes before I go to bed would not only make me feel better about myself but also help me to sleep better as well," reads a post from April 2013.

When one commenter called out Hamill for the anti-semitic jokes, he responded, "u don’t like it? Don’t read it then."

In a statement posted to the Gainesville Police Department's Facebook page, spokesman Ben Tobias said they're "reviewing the allegation" and that any information about the complaint was confidential until the investigation was concluded.

"The Gainesville Police Department prides itself with our philosophy and mission of compassion, inclusion, and respect and will fully review the matter," the statement continued.

Gainesville Police Department has since removed the viral photo.
This whole situation is what is referred to as a "Milkshake Duck."

The whole internet loves Milkshake Duck, a lovely duck that drinks milkshakes! *5 seconds later* We regret to inform you the duck is racist