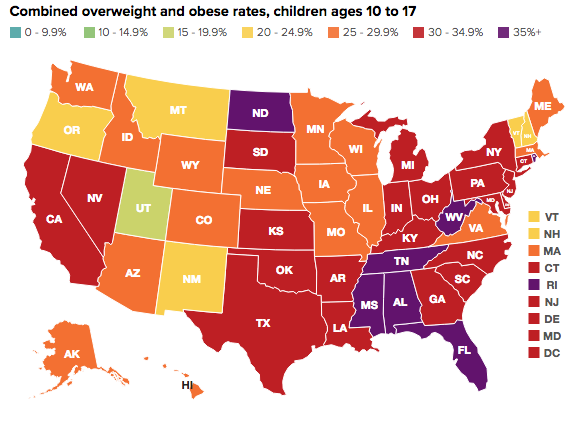 The 2016 National Survey of Children's Health, released Tuesday by The State of Obesity, an organization dedicated to addressing America's obesity epidemic, reports that 36.6% of Florida children aged 10-17 are obese.

Meanwhile, the study reports the U.S. average for the age range is 31.2%.

The numbers represent a significant increase from the study's previous year, 2011. While The State of Obesity notes that changed data-gathering methods could account for some of the differences, Florida's much lower 27.5% childhood obesity rating in 2011 is striking, nevertheless.

For all populations, the majority of obese persons lived in southern states.

As more than 1 in 4 Florida residents are obese, many suffer from related health complications. The Sunshine State is 11th in the U.S. for the number of people with diabetes, and 16th for those suffering from hypertension.