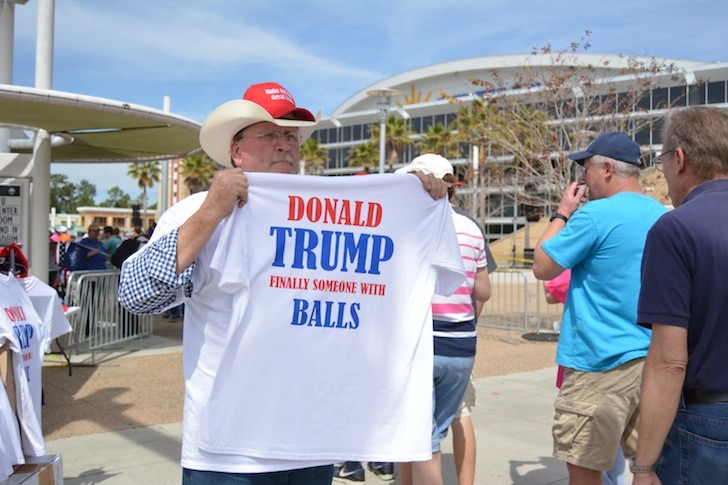 Just two weeks ago, it was revealed that Facebook allowed Russians to spend $100,000 on targeted ads during the election. Now, the Daily Beast reports that Russian Facebook accounts helped organize pro-Trump rallies in Florida in 2016.

According to an incredible report from the Daily Beast, multiple Florida events were put on by a Russian-based Facebook page called "Being Patriotic," which amassed 200,000 followers before it was eventually shut down last month.

From the Daily Beast:


The demonstrations—at least one of which was promoted online by local pro-Trump activists—brought dozens of supporters together in real life. They appear to be the first case of Russian provocateurs successfully mobilizing Americans over Facebook in direct support of Donald Trump.

The Aug. 20, 2016, events were collectively called “Florida Goes Trump!” and they were billed as a “patriotic state-wide flash mob,” unfolding simultaneously in 17 different cities and towns in the battleground state. It’s difficult to determine how many of those locations actually witnessed any turnout, in part because Facebook’s recent deletion of hundreds of Russian accounts hid much of the evidence. But videos and photos from two of the locations—Fort Lauderdale and Coral Springs—were reposted to a Facebook page run by the local Trump campaign chair, where they remain to this day.

The page was shuttered around the same time Facebook began pulling the plug on accounts run by Internet Research Agency, a troll organization financed by "a close Putin ally with ties to Russian intelligence."

Florida rallies were also organized by a Twitter account called @march_for_trump, which actually reached out to local reporters asking them to cover pro-Trump events.

In total, the Daily Beast estimates that Russians helped organize events in at least 16 U.S. cities during the last election. This is the first evidence of Russians actually mobilizing Trump supporters in real life, says the Beast.