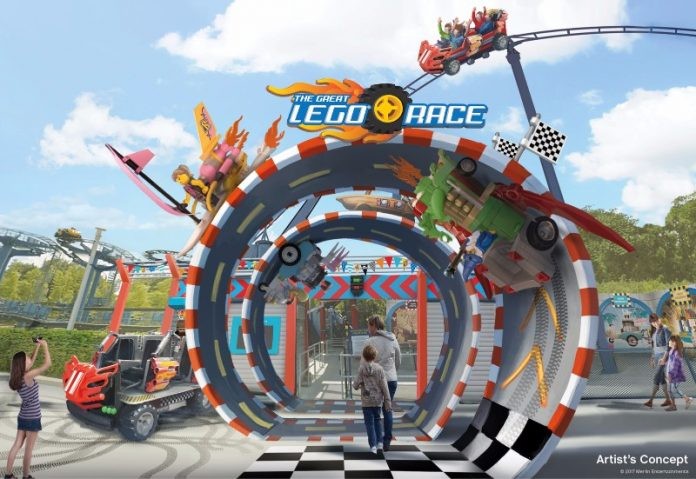 From coasters at Fun Spot and SeaWorld to a new Star Wars-themed attraction at Walt Disney World, virtual reality is all the craze at theme parks these days. Now Legoland is looking to get in on the action with a brand new VR experience in 2018 with what it's calling the “first virtual reality roller-coaster designed for children.”

Legoland parks in Germany, Malaysia, and Florida will be opening “The Great LEGO Race” VR coasters. The race-themed attraction will use the same coaster track as the Lego Technic Project X ride. Project X is one of the original rides for Legoland Florida. The Wild Mouse style coaster is built by Mack Rides features ride vehicles with two rows of two passengers per row.

The smaller ride vehicles may help Legoland to not encounter many of the loading issues that other parks have faced with VR coasters. The headsets mean slower loads with ride dispatches, and in turn ride capacity, being cut by well over two-thirds in some cases. When SeaWorld Orlando unveiled VR on its Kraken coaster earlier this year wait times for the ride regularly topped multiple hours. SeaWorld used a ride reservation system to allow guests to not stand in line during those extended waits, but reservations often filled for the ride within hours of the park opening.

Other parks, such as Six Flags, have been all in on VR from the beginning, but with long lines and disgruntled guests it was quickly removed from some of the attractions. Though VR does remain on many rides at Six Flags parks.

Legoland has a few advantages the other parks don’t have. The kid-focused parks have attendance than the larger Orlando parks. Designed for ages 6 and up "The Great LEGO Race" may also mean easier loads with tech wise youth being the primary riders. Riders under 6 who meet the height requirements are able to ride without a VR headset, while other guests can also request to ride without a headset.

A completely new queue experience will involve interactive elements and videos showing how the VR experience compares to a non-VR point-of-view of the ride. Large props and a tunnel guests walk through at the entrance of the ride will also create great new photo opportunities.

LEGO Minifigures Trendsetter, Pharaoh, Surfer Girl, Wizard and Pirate Captain will all be featured on the VR ride. In a press release, Legoland described the new ride experience as “a rollicking race against wild, brick-built contraptions driven by Trendsetter, Pharaoh, Surfer Girl, Wizard and Pirate Captain, including a rocket-powered surfboard and a stylish scooter fueled by espresso. Wearing VR headsets, guests will experience the action from every direction – up, down, forward, backward and all points in between – in a dazzling environment where everything is made of LEGO bricks.”

The new ride experience will open later this year in Malaysia, followed by Germany and Legoland Florida in 2018. There’s no word on if Legoland California, or the yet-to-open Legoland New York, will be receiving the updated ride experience.