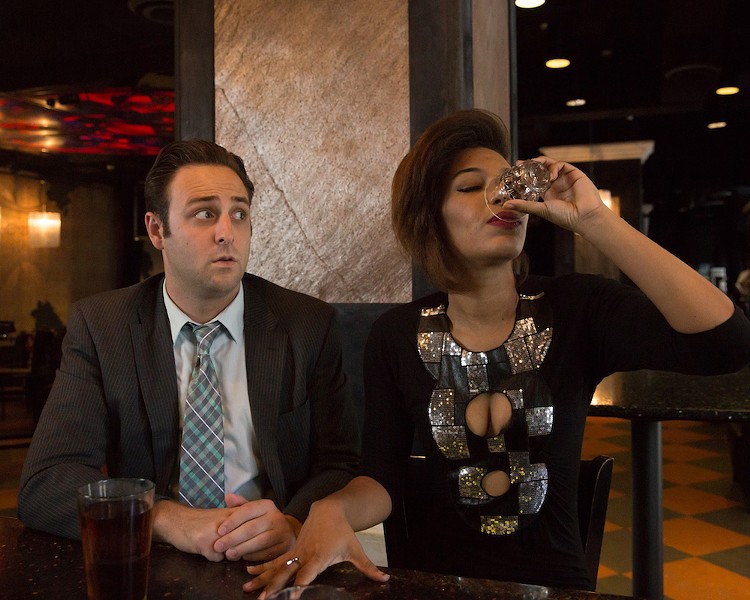 I’m continually grateful to have been happily coupled for the past decade, and therefore exempt from modern society’s excruciating courtship rituals. But I may have felt different about being single if any of my early romantic encounters had been half as effervescent as Generation Production’s presentation of First Date, which closes this Saturday, Sept. 30, at the Abbey. This charmingly compact meet-cute musical may not have met Hamilton-sized success when it debuted on Broadway in 2013, but this spirited staging from director Kenny Howard demonstrates that it deserves a long life in regional theater.


Michael Knight and Kellie Rhianne play Aaron and Casey, a mismatched odd couple on an arranged blind date. He’s an anxious Semite saddled with serious ex-fiancee issues; she’s commitment-adverse chatterbox shiksa. "Opposites attract" may be an age-old cliché, but watching their uncomfortably awkward introduction morph into incipient amour is far more compelling than the plot outline would suggest, thanks to Austin Winsberg’s ribald script and the hummable pop-pastiche score by Alan Zachary and Michael Weiner.

As the central duo, Rhianne and Knight are so well-cast that it’s hard to imagine New York originators Zachary Levi and Krysta Rodriguez being much better. She’s got a stellar set of pipes, which are put to great use during the breakout ballad “Safer,” and manages to skirt around the manic-pixie stereotype in her characterization. Knight’s voice isn’t quite as polished, and he’s saddled with a mawkish solo about his dead mom, but he more than makes up for it with his expertly off-kilter comic timing. The ensemble that portrays the staff and patrons of the restaurant where Aaron and Casey rendezvous is also well-rounded, with Jason Blackwater standing out for his Paul Lynde-esque interpretation of the all-seeing waiter.

But the real star of this show is Howard’s 360-degree staging, which seats audience members at cocktail tables alongside the actors for an experience more ebulliently immersive than any virtual reality theme park attraction. Additional kudos go to Theresa Hanson for her bubbly Busby Berkeley-worthy choreography, which turns tabletops into dance floors and makes the 10-member cast seem far larger than it is without overwhelming the intimacy.

This 90-minute morsel may be modest in scope, but it’s got more heart than most musicals twice its size. My only real critique is that, as is too often the case at the Abbey, musical director John B. deHaas’ peppy onstage pit band overwhelms the singers, making it hard to decipher some of Zachary & Weiner’s dense, witty lyrics. But don’t let that dissuade you from swiping right on First Date for a delightful evening out.