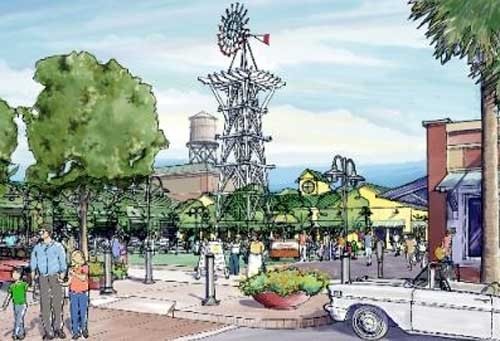 Back in 2007, Disney announced a new budget-conscious development known as Flamingo Crossings. The new mixed-use development was put on the back burner when the recession hit a year later. Disney then got distracted with transforming Downtown Disney into the much higher-end shopping district Disney Springs.

With a half-million square feet of retail, 5,000 hotel and timeshare units, and over 1,000 apartment units slated for the 450-acre development Flamingo Crossings will be a major addition to the State Road 429 corridor.
In early 2016 the first two of seven hotels planned for Flamingo Crossings opened. A TownePlace Suites and a SpringHill Suites, both Marriott brands, opened a single-site dual-branded property. The two hotels share a parking area and other amenities, such a pool area and pool bar. At the time of the opening, the TownePlace Suites was the largest ever opened.

As recently as 2014, plans were announced for two more hotels and a Walgreens, all slated to open by spring 2017, but there has been zero progress of any projects since the original two hotels. But now we finally know a bit more about what Disney has slated for the development that’s located on 429 just one exit north of 192.

Disney’s Senior Real Estate Manager, Henry Thrash, recently gave an update to Flamingo Crossing when speaking at the International Council of Shopping Centers Florida Conference & Deal Making expo. He confirmed that Disney is moving ahead with value-focused brands for the development.

Thrash showed off an updated concept plan for 45 acres near the Marriott hotels. The plans show a village style commercial district very similar to Winter Garden Village or the Margaritaville Resort Town Center. The plan has 29 building pads with 237,000 square feet of retail space split between two phases. About a third of the buildings appear to have drive-thru options. Thrash confirmed the value-oriented development would have a number of fast-casual concepts.

The plan also confirms the names of the many of the yet-to-be-built hotels. Just north of the pre-existing hotels is a plot earmarked for a Hampton Inn and Suites. On the north side of Flagler Ave., a new street that circles the commercial district, a Hyatt House, a Hyatt Place, a Hilton Garden Inn, and a Residence Inn are all mentioned. Hyatt House is an updated extended-stay brand from Hyatt that has aggressively been opening in the Central Florida market. One will soon open just across Kirkman Road from Universal Orlando.

The Hampton Inn and Suites at Flamingo Crossings will be developed by the same company, JL Properties, as the two pre-existing hotels. In the Flamingo Crossings will have a similar feel to Hotel Boulevard, found near Disney Springs. That on-site street has a number of third-party hotels and ends at the edge of Disney property where the Crossroads commercial development is located. Disney developed this commercial district in the late 1980s and sold it in 2005. Flamingo Crossings can in some regards be understood as an version of Hotel Boulevard and Crossroads.

On top of the now-confirmed seven hotels, at least 12 more hotels were planned, according to the original site plan.

Missing from the newly shared concept plan is a 1,300-unit apartment complex that will be used by the Disney College Program. There’s some speculation that this might be a replacement for the infamous Vista Way complex that’s located just northeast of Disney Springs. Vista Way opened in 1987 and was the very first apartment complex to be used exclusively by the college internship program. Three other company-sponsored housing complexes have come online in the decades since Vista Way first opened, but Vista Way has remained by far the most notorious, having been featured in everything from locally made rap videos to various news articles, including a long-rumored Playboy article; though this specific article, which supposedly ranked it second only the Playboy Mansion as the easiest place to get laid, is possibly more an urban legend than an actual article. The term Vista Lay has stuck, though.

Flamingo Crossings is one exit north of 192 and will likely compete heavily with that tourist corridor for budget-conscious travelers. With the Disney Skyliner rumored to be linking to the All-Star Resorts in the coming years, the prices there will likely go up leaving the most thrifty guests with few on-site options. Flamingo Crossings will fill the void and keep these guests closer to the "bubble" than if they go fully off-property for a resort on 192 or I-Drive.

Groundbreaking on the new commercial village should begin in early 2018.