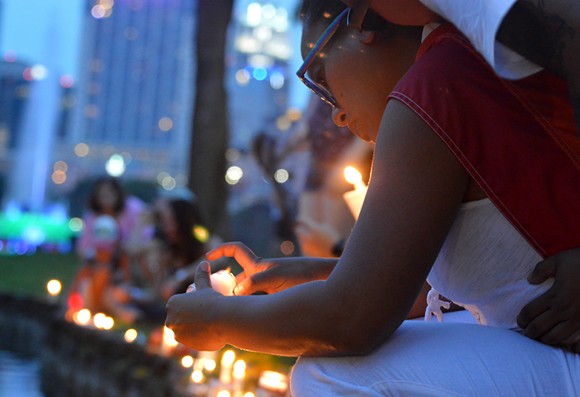 The One Orlando Alliance is planning a vigil Tuesday night to honor the victims of the Las Vegas mass shooting, which currently stands at 59 dead and more than 500 wounded.

The Orlando United for Las Vegas vigil will be tonight at the Seneff Art Plaza in front of the Dr. Phillips Center for the Performing Arts, 445 S. Magnolia Ave. The event starts at 6 p.m.

"Our hearts are with the people of Las Vegas who have been shaken by this horrific and senseless tragedy," the organization said in a statement. "Although divided by distance, we are united in offering our compassion, our love and our support. We were deeply touched by the heartfelt outpouring of support from Las Vegas following the Pulse nightclub tragedy. We stand ready to assist the people of Las Vegas as they navigate the aftermath of this tragedy and begin the healing process."

The Las Vegas massacre is now the deadliest shooting in modern American history, overtaking the 2016 massacre at the gay nightclub Pulse in Orlando where 49 people were killed by a gunman.

Counselors will be at the vigil to help, and people can reach out individually for someone to talk to at the organizations listed here.