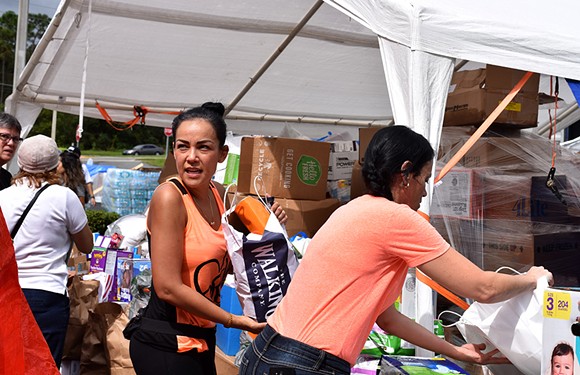 Gov. Rick Scott is opening three disaster relief centers in Florida to help Puerto Rican evacuees fleeing the disaster on the island in the aftermath of Hurricane Maria.

Scott announced centers would open in at Orlando International Airport, Miami International Airport and the Port of Miami to provide families arriving from Puerto Rico with available resources from the state seven days a week, from 7 a.m. to 9 p.m. The Tampa Bay Times reports the centers will be staffed by state employees, FEMA, the Red Cross and Catholic Charities. Scott has also directed the Florida National Guard and the Florida Fish and Wildlife Conservation Commission to be prepared for deployment as soon as they receive a request for Puerto Rico, and the Florida Air National Guard is already in Puerto Rico coordinating air operations. On Monday, the governor declared a state of emergency for all 67 counties to help Puerto Rico relief efforts.

"Our goal is to make sure that while Governor [Ricardo] Rosselló is working to rebuild Puerto Rico, any families displaced by Maria that come to Florida are welcomed and offered every available resource from the state," Scott says in a statement. "These Disaster Relief Centers will help Puerto Ricans coming into Florida get matched with all the available state resources they may need and ensure that as families come into Florida, they are given the tools they need to work and provide their children with a great education."

Florida Democrats had asked Scott to open relief centers on Sept. 29 to provide migrating Puerto Ricans with a one-stop shop where people could get help on housing, jobs, education and access to programs like Medicaid and SNAP.

Last weekend, survivors of the Pulse massacre and victims' families joined CASA volunteers to gather water, food, diapers and other supplies for the island at Acacia El Centro Borinqueño in east Orlando. State Sen. Victor Torres, D-Orlando, said the reason it's taking so long to get help to people in Puerto Rico is a matter of the federal government not being prepared for the catastrophe. Puerto Rico could be four to six months with electricity and is currently without drinking water.

"Why is it that when these types of situations happen, we waited 'till the end?" Torres says. "Then we try to organize and we're finding ourselves in a hole. You lifted the Jones Act for Texas and Florida, but it wasn't until days after [the hurricane] for Puerto Rico. How can you lift the Jones Act for Puerto Rico for 10 days and expect good results? That doesn't make sense."

Torres says Florida could do more to help on the island and to prepare for the influx of Puerto Rican families who will likely flee the U.S. territory and resettle in the metro Orlando area. New arrivals will probably need help finding housing or an immediate place to stay, which is difficult in Central Florida because of the lack of affordable housing. Torres couldn't estimate how many people might be moving to the area, but some reports estimate it could be 100,000.

"I don't see anytime soon that Puerto Rico is going to be on its feet," he said. "Florida is a state that has the capacity to do more. We handle disaster all the time."

Torres was also critical of President Donald Trump's tweets attacking Mayor of San Juan Carmen Yulín Cruz who asked the federal government to step up in helping the island of 3.4 million American citizens.

"She's begging him for help," Torres said. "And it's not partisan. The tweet has astounded me. This is not the time or place. I understand he has a lot on his place, but guess what Mr. President: You ran to run this country. You're accountable for what happens to all Americans, and that includes the Virgin Islands and Puerto Rico."

Former congresswoman Gwen Graham, who is running for Florida governor, was also at Saturday's event helping pack donations into a large truck. Graham also criticized the president's tweets to the Mayor of San Juan and the White House administration's response to the devastated island.

"The federal government should have been on the island immediately with all hands on deck, all the resources after the storm," she said. "The reality of what we're seeing in Puerto Rico is the failure of our government to adequately respond and help the Americans who live on Puerto Rico. ... I mean, who would choose to tweet out what he tweeted out? It makes me so despondent to think this is the president of our country and that's something he thinks is appropriate."