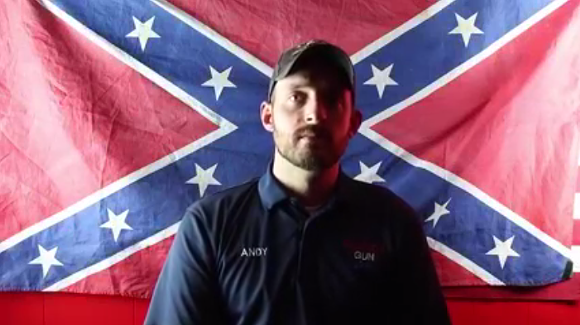 Florida Gun Supply, a store that just last year said they plan to ban all Muslims from shopping there, has now been banned from YouTube.

In a recent Facebook post, the store, which is located in Inverness, claimed they were banned because YouTube considers what they post as hate speech. The store also posted a comment on the same thread saying they have "no idea" exactly why they were banned.

Florida gun store owner declares his shop a 'Muslim-free zone'
By Colin Wolf
Blogs
In July of 2015, store owner Andy Hallinan, posted a video announcing that effective immediately his store is now a "Muslim-free zone." Hallinan's store was then taken to court by the Council on American-Islamic Relations (CAIR) over a religious discrimination lawsuit.

George Zimmerman, best known for fatally shooting unarmed teenager Trayvon Martin in 2012, came to Hallinan's defense, and auctioned off a poorly made Confederate flag painting to help pay for his legal defense.

A few months later the suit was surprisingly tossed out by a federal judge who said the store was protected by the First Amendment. Hallinan then said he would celebrate the court's decision by handing out "Muslim-free zone" bumper stickers.

Since then, Hallinan has not stated whether or not he plans to ban angry white men, who, according to the New York Times have killed more American citizens than any other group since 9/11.

As promised, Florida Gun Supply has created a new YouTube page, which will more than likely also be banned.

UPDATE:
Hallinan spoke with Orlando Weekly, and told us he had purged his channel of any videos that violated their terms, but believes he was banned from YouTube because of a video about military drone strikes.

He also told us that he has since removed the "Muslim free zone" sign hanging in his shop, and most importantly that the media portrays George Zimmerman in a negative light, but he's much worse in person.

"He's a racist, and only racists support him," said Hallinan, who says he lost money on the hand-painted Zimmerman Confederate flag fundraiser.