A new bill hopes to put in place a monument honoring the victims of slavery in Florida's state capital.

The bill, SB 286, was introduced by Miami Rep. Kionne McGhee to the Florida Legislative committee this week and has received widespread bipartisan support. 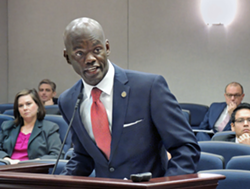 If successful in the Senate, the bill will authorize the construction of a commemorative memorial on the Capital Complex grounds in Tallahassee.

Following the events in Charlottesville, North Carolina, McGhee says the time for the memorial is now. Though McGhee himself has tried to distance the memorial from the ongoing debate about Confederate monuments - a task which has proven difficult.

McGhee proposed a similar bill in the spring 2017 legislative session, according to The Miami Herald. That bill found equally unanimous support in the House, but failed to pass the state Senate.

Though the design of the memorial is yet to be finalized, the bill will now move on to the state Senate in the 2018 legislative session, which begins in January.