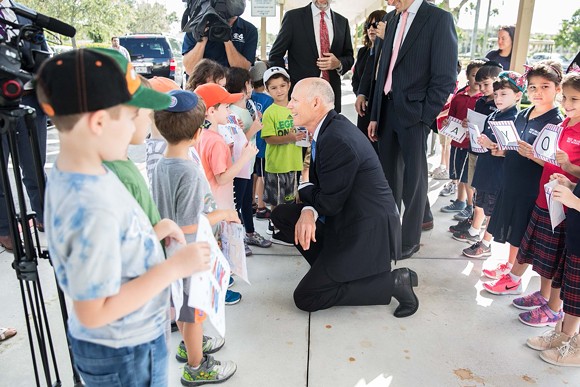 Scott announced the plan Monday while speaking at the Katz Hillel Day School in Boca Raton. With next year's legislative approval, the funds would allow Katz Hillel and other Jewish Day Schools to purchase new fences, video cameras, bulletproof glass, and other security and counter-terrorism hardware.

"After Florida’s Jewish community received hateful threats last year, we saw the need to provide additional security so the children that attend Jewish Day Schools can learn without having to worry about feeling threatened," Scott said in a statement.

Those hateful threats were part of 2016's increase in anti-Semitic hate crimes, as recorded by the Anti-Defamation League during their annual audit. A number of those crimes concerned schools – three swastikas were spray-painted on the walls of Lake Brantley High School in Altamonte Springs, and several institutions received bomb threats.

Scott directed more than $654,000 towards Jewish day schools' security in the previous budget.

"While last year’s investment will make a huge difference, we must continue to do more," Scott said.

Scott's proposal will enter deliberation during Florida's next legislative session in 2018.