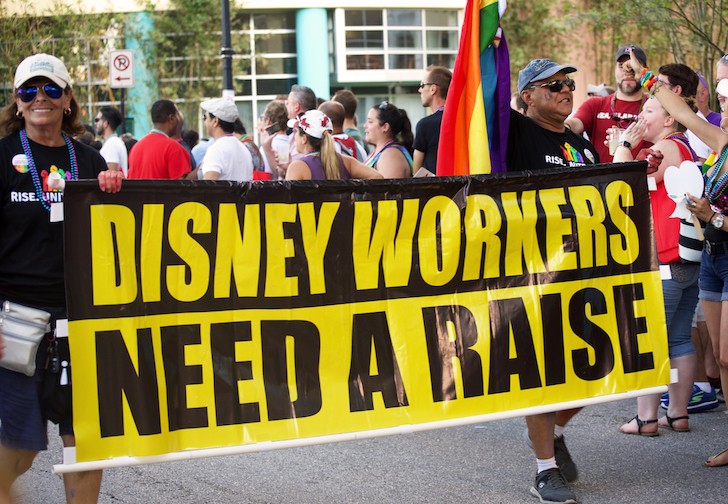 Every paycheck Diana Geary gets from her $11.50-an-hour job as a ride operator at Animal Kingdom, the 41-year-old asks herself several important questions: How will she buy groceries? Can she split up this invoice she can't afford into monthly payments? And who do does she have to call to get that bill pushed back?

Like many hospitality workers who toil away for low wages in Central Florida's tourism economy, Geary can't afford much on her salary. She and her husband rent with her parents to make it work, though some of her co-workers have it worse – they live in cheap motels behind Walt Disney World on U.S. Highway 192 or borrow money from family for basic needs.

Geary and hundreds of other union workers plan to rally Thursday, Oct. 19, at 5 p.m. in front of the Crossroads entrance to Disney at State Road 535 and Hotel Plaza Boulevard in support of the unions' proposal to Disney in ongoing wage negotiations and to show the company their strength. The rally in Orlando is happening at the same time as similar rallies by hospitality workers with in over 40 U.S. and Canadian cities.

"I want Disney to see how important this is to their cast," Geary says. "That's why they're coming out. They need a living wage."

Geary's union, Unite Here Local 362, has joined with five other other local unions to make the Service Trades Council Union to negotiate a wage increase with the theme park for $15 per hour. STCU represents 38,000 Disney cast members, with 23,000 cast members making less than $12 an hour, and out of those, 8,000 who earn $10 an hour. In past statements, Disney said it would offer a ""fair and equitable" employment package for cast members and the company, but the company has so far proposed a 2.5 percent salary increase for its employees while keeping the minimum wage at $10 an hour for new workers. The Orlando Sentinel reports Disney calculates the average hourly wage for one of its workers is about $13.34 including overtime and premium pay. The last time the unions negotiated with the theme park, they agreed to raise the starting pay from $8.03 to $10.

"While that agreement boosted pay for Disney Cast Members and many more hospitality workers in competing non-union theme parks and hotels, hundreds of thousands of Central Florida workers continue to struggle with poverty," according to a statement from the unions.

Geary says raising her wages would significantly improve her quality of life and help her pay some expenses for her two kids in college to let them focus on school instead of work.

"I spend anywhere from 40 to 60 hours every week at my workplace with picking up extra hours to make ends meet, but my home suffers" she says. "It takes time away from husband and my family. I'm 41 and I live with parents. They were always able to secure housing because of higher wages – this was never an issue for them. I never thought I would need to go live with parents because it's the only way to make this work. It makes you kind of feel inadequate as an adult."