A Florida brewery is giving the 'Chainsaw Nun' her own beer 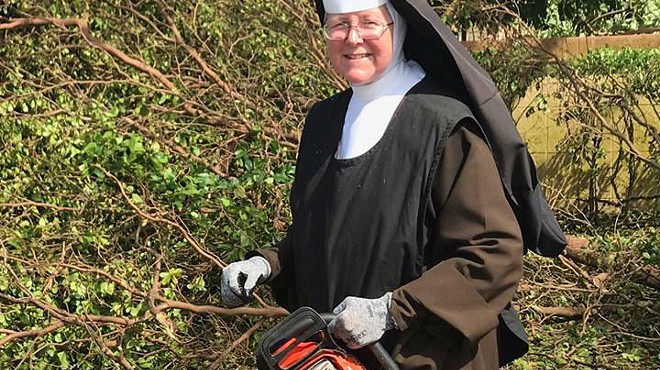 A Florida brewery is now serving a special brew in honor of Sister Margaret Ann, who made headlines after a video showed her hacking through debris with a chainsaw in the aftermath of Hurricane Irma.

On Oct. 20, Due South Brewing Company released "Nun With a Chainsaw," which doesn't taste like the holy spirit or chainsaws but is more of a tribute to Ann's spirit in the aftermath of Hurricane Irma.

"That story really resonated with us," said Due South's marketing manager, Doug Fairall, in an interview with SouthFlorida.com. "We all dealt with that. I know I did."

In a video posted on the Miami Dade Police Department's Twitter, Sister Ann is seen sawing through a large pile of debris, black gown billowing in the wind. Ann is the principal of Archbishop Coleman F. Carroll High School in southwest Miami-Dade County.

While Nun With a Chainsaw doesn't feature the image of Sister Ann, its schlock horror-movie font-styling makes it stand out nevertheless. As The Full Pint reports, the beer has a tropical and piney flavor. It was brewed from Amarillo, Azacca, and Idaho 7 hops.

🎥 of Sister Margaret Ann in action. Thank you to all of our neighbors that are working together to get through this! We are #MiamiDadeStrong pic.twitter.com/5tG6nzk7Ye

"We're having fun with it, for sure", said Fairall. "But it was a serious event that took place here. She symbolized us all being brought out of our element to do what had to be done."