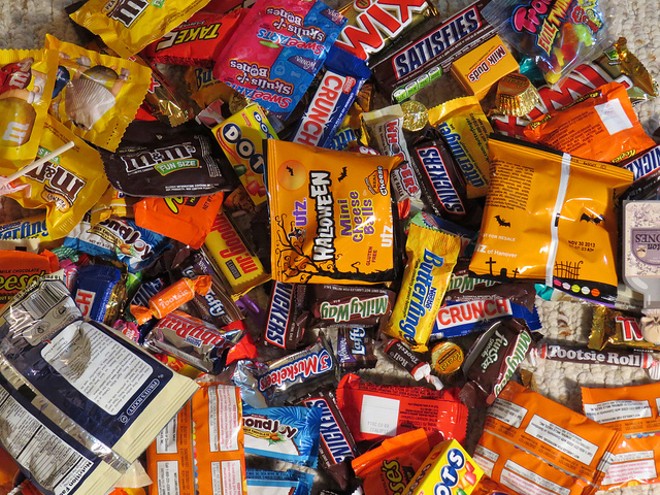 Exactly one year ago today, Orange County Sheriff Jerry Demings warned everyone to be on the lookout for marijuana-laced candy over Halloween weekend.

Speaking at a news conference hosted by the anti-medical-marijuana group "Don't Let Florida Go to Pot," Demings, who is currently running for Orange County Mayor, played on parents' fears that someone out there might actually give their kids pot candy.

"It looks like any other candy," warned Demings. "Sometimes there's just mean-spirited people who infuse these type of products into our society to create confusion and injure our children and other people. Even though the potential for the marijuana edibles appearing this year may be somewhat minimal, it is still a threat in our community."

The only problem with Deming's public service announcement, as well-intentioned as it may have been, was that nothing like that even remotely happened.

And now that Amendment 2 has passed with flying colors, I'm willing to bet that number will remain the same. Why? Because last year wasn't an anomaly.

The fact is, it just doesn't happen. Every year, the same baseless theory surfaces that druggies are sneakily handing out free dope to kids, and every year it's debunked. You actually have a better chance of catching Ebola than getting free weed on Halloween.

According to the Guardian, the weed-friendly state of Colorado had only 16 cases of accidental marijuana ingestion in children under the age of 9 in 2014. Of those cases, guess how many happened during Halloween? Zero.

Marijuana isn't the only drug not being handed out on Halloween. Literally no drugs are being distributed kids in costumes. There actually hasn't been a single reported case of a child being injured or killed by candy that's been tampered with on Halloween.

Despite public officials saying there's a boogeyman trying to poison your kids, and even with medical marijuana now available in Florida, the truth is you and your children aren't scoring any free drugs this year.