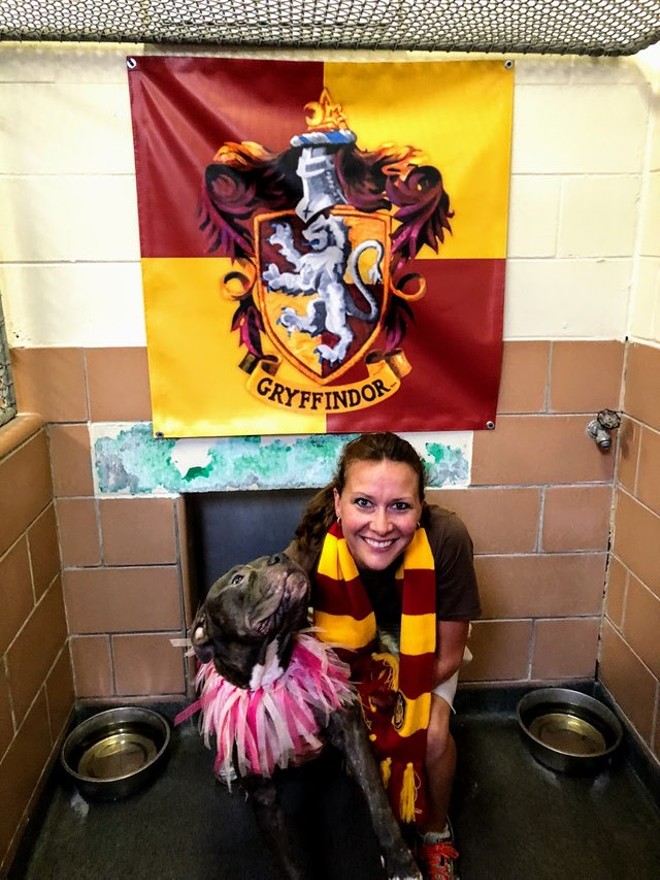 In a smart move to shift the conversation from breeds to personalities, the Orlando Pet Alliance has begun sorting their rescue dogs into their appropriate Hogwarts houses.

Pet Alliance executive director Stephen Bardy wanted to find a way to help potential adopters focus on personality rather than breed, so Diane Andersen, the animal behaviorist at the Pet Alliance (and a big Harry Potter fan), created a "Pawgwarts" test using toys to evaluate each dog's qualities and place them in the appropriate Hogwarts house. The shelter hangs house banners in the shelters, so you can match yourself with the house you feel best fits your hopes for a pet.

Bardy tells Orlando Weekly, "When we think of a dog based on their personality rather than their breed – which 70 percent of the time is mislabeled based on physical attributes – the result is a better match for the adopter. The Pawgwarts sorting helps people focus on a dog's individuality, personality, likes and dislikes, instead of simply aesthetics. It starts the conversation of 'what do you see yourself doing with your dog?' and leads to better matches. For example, if someone wants a dog to cuddle up and stream Netflix, they really don't want a puppy, husky or any type of dog that needs a lot of exercise or play."

Not sure what you're looking for in a prospective pet? The sorting might help crystallize your thinking. Bardy says, "Ravenclaws are known for their intelligence and creativity. They are quick to learn a new trick. Hufflepuffs demonstrate dedication and loyalty and they have never met a stranger. Gryffindor are the athletes of the house and relish the opportunity to fetch a good stick. Slytherin dogs are known for leadership and cunning. Be careful, they might be smarter than you!"

We asked Bardy whether adopters should look for dogs from the same house they would belong to, or if different houses complement each other. He tells us, "We don't believe you have to have the same housemate, but it certainly gives you a reference point to start talking about who you are as a person and what type of dog would make your ideal companion."

If you want to sort your own pet, you can take a Pawgwarts Quiz on the Pet Alliance site. Bardy says, "Personally, I am a Hufflepuff. Using the Pet Alliance Pawgwarts sorting quiz, my schnauzer, Milo, is Slytherin. I embrace the qualities of my Slytherin schnauzer as he is cunning and a clear leader. I am never quite sure what is behind that daring stare of his."

That very good boy of yours might actually be a Gryffindor, just as you secretly suspected all along. That crafty beagle who can get under any fence, any time, and roll in a dead possum three miles from home? Slytherin, too smart for his own good. And the sweet golden retriever who can't catch a Frisbee to save his life but never stops trying? Probably a Hufflepuff. (So far about 40 dogs have been sorted, with the majority falling into Hufflepuff, to absolutely no one's surprise).

P.S. So far the Alliance is sorting dogs only, not cats. They sent along this photo of a cat pretending to be a Hufflepuff, though it goes without saying that all cats are either Ravenclaw or Slytherin, and it doesn't take a Sorting Hat to tell which are which.