Rick Scott wants generators to be a requirement in Florida nursing homes, whether this happens or not is unclear 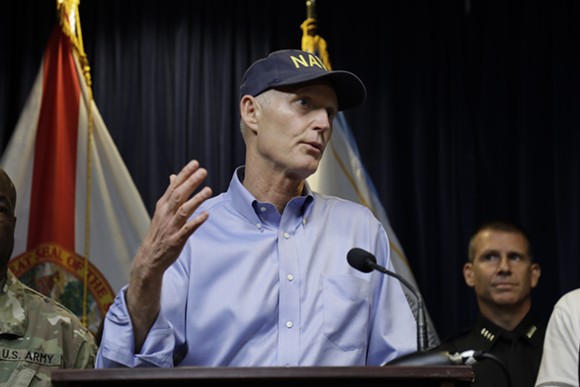 Though Gov. Rick Scott wants to require nursing homes and assisted living facilities to have generators and enough fuel to cool their buildings for 96 hours, legislative leaders on Thursday didn't publicly commit to supporting such a mandate. Appearing at an annual Associated Press event in the Capitol, Senate President Joe Negron, R-Stuart, did not directly answer a question about whether the Senate would sign off during the upcoming 2018 legislative session on a mandate that nursing homes and assisted living facilities have generators. “I see something passing that reaffirms the responsibility of a nursing home who has accepted patients, residents into its care, to make sure they are taken care of during any kind of storm event which is 100 percent predictable and foreseeable for Florida,” Negron said.

Florida senator suggests sweltering nursing home may not be to blame for all 14 deaths
By Christine Sexton, News Service of Florida
Blogs
Similarly, House Majority Leader Ray Rodrigues, R-Estero, refused to say whether the House supported a mandate, saying it would be discussed by the House Select Committee on Hurricane Response and Preparedness. Lawmakers also could be confronted during the 2018 session with requests for the state to help pay for generators at long-term care facilities. When pressed about whether the state should help offset the costs of the generators, Rodrigues said it would be an issue that members would have to “grapple with.” The House during the past year has taken a high-profile stance to try to curb state business incentives. “When I listened to the debate from our members, what our members find most objectionable is giving the public money —- taxpayer money —- to private companies to improve their bottom line at the expense of the public or their competitors, which is inherently unfair,” he said, adding that helping offset costs of the generators would help all homes care for Medicaid patients. “This isn't given out in order to promote one business over another but instead to protect life,” he said. The generator issue stems from the deaths of residents of a sweltering Broward County nursing home after Hurricane Irma. Eight residents of The Rehabilitation Center at Hollywood Hills died Sept. 13, three days after Irma knocked out the facility's air-conditioning system. Six more residents died later after evacuation. The Scott administration has moved forward with administrative rules to try to require generators at nursing homes and assisted living facilities. But Scott also has called for making the requirement more permanent by putting it in state law. Bills have been filed in the Senate to address emergency power requirements. Senate Children, Families and Elder Affairs Chairman Rene Garcia, R-Hialeah, has filed a proposal (SB 372) that would allow nursing homes to contract with providers that can supply up to 96 hours of backup power or, as an alternative, have the capability on site by July 1. Meanwhile, Sen. Lauren Book, D-Plantation, filed a bill (SB 284) that would require nursing homes to maintain an emergency-power source and fuel supply that could last during a five-day power outage. Also, Sen. Daphne Campbell, D-Miami, filed a proposal (SB 558) that would require nursing homes by Jan. 1, 2019 to have on-site generators and fuel supplies that would last for a minimum of 96 hours. After the Broward County deaths, the Scott administration in September issued two emergency rules that called for nursing homes and assisted living facilities to quickly add generators. The emergency rules have drawn legal challenges from industry groups, which say the rules include an unrealistic 60-day timeframe. An administrative law judge last week agreed with the groups that state agencies overstepped their legal authority in issuing the emergency rules. The Scott administration has taken the case to the 1st District Court of Appeal. Meanwhile, Scott also is trying to require generators by going through the traditional rule-making process, which can take months or even years. The Florida Health Care Association, a nursing-home group that was not involved in the legal challenges, maintains that, on average, generator costs for nursing homes would be aboutÂ $350,000 and that if all nursing home providers were required to purchase generators, it could cost upward of $230 million. The association estimates that about 60 percent of all resident nursing-home days are paid by the Medicaid program. Sixty percent of the costs of the mandate would equal about $138 million. If the state were to use Medicaid to cover those costs, it would cost state taxpayers about $53.8 million, with other money coming from the federal government. Though Negron wouldn't disclose whether he supported a generator mandate, he said he “could see a situation where there could be some state obligation to assist in making sure there was sufficient funds for that to be done.” He said spending committees were examining if some kind of “pass through” for generator costs could be picked up, in part, by the state. But, he added, “I think as a general proposition, however, it is the responsibility of the nursing home facility to make sure their residents are protected n a storm.”