You can get a DUI on a horse in Florida 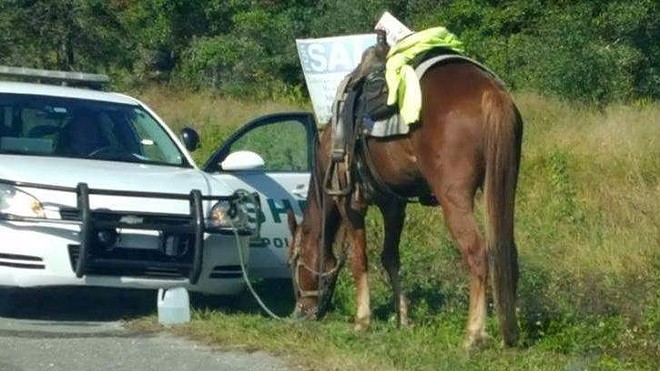 When it comes to DUIs, Central Florida sheriffs aren't horsing around. A Polk County woman was arrested yesterday for drunkenly riding her horse down a Central Florida roadway.

In a released statement, Polk County Sheriff Grady Judd said "Ms. Byrne was obviously not in any condition to be on the road. She not only put herself and the horse in danger, but also anyone who was driving on the road, which is typically very busy."

Officers were notified by a passing driver, who told deputies that the horseback Byrne appeared "confused and possibly in danger".

Florida statute currently defines a vehicle as "Every device in, upon, or by which any person or property is or may be transported or drawn upon a highway, except personal delivery devices and devices used exclusively upon stationary rails or tracks."

As the attorneys at the FL DUI Group writes, this has previously meant you can be charged for a DUI on a bicycle, golf cart, and beyond. "A common misconception...is the belief that you can only be arrested for DUI if you were driving a motor vehicle. Unfortunately, this belief is completely false.