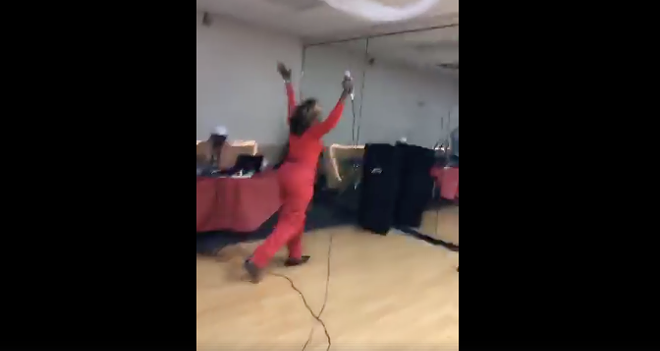 In a happy celebration, Orlando City Commissioner Regina Hill literally jumped for joy after learning halfway through her speech that she had narrowly avoided a run-off election by getting 50.24 percent of the vote.

When the initial election results were first posted Tuesday night by the Orange County Supervisor of Elections office after polls closed, it looked Hill didn't have a majority of the vote, meaning the incumbent would have to run against challenger Ericka Dunlap in December.

"We won early voting," Hill said during a video of her speech when she still thought she had only won 49.8 percent of votes. "We won vote-by-mail and we won showing up at the polls."

"We are winners. The people still won tonight," Hill says around the 6:30 minute mark before she is interrupted by her staff with the final vote tally. "Oh, did we win?!"


Hill was in a tight race with six challengers for the District 5 seat, which includes downtown through Parramore and MetroWest. Dunlap, a former Miss America pageant queen and public relations professional, came in second with 24.7 percent of votes, followed by Sarah Elbadri with 7.3 percent; Cynthia Harris with 7.3 percent; Jibreel Ali with 6.7 percent; Betty Gelzer with 3.5 percent; and Ondria James with less than 1 percent.