Today the International Association of Amusement Parks and Attractions (IAAPA) kicks off its annual Attractions Expo at the Orange County Convention Center. The annual event is filled with industry news, events, and business deals. The trade show floor opens tomorrow morning and with it a flurry of press conferences. There will be a ton of news this week. With that in mind, here are the five biggest groups with a local connection to be watching this week. 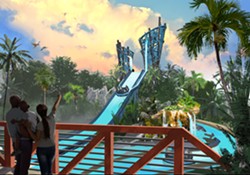 With attendance and profits still dropping, the Orlando-based theme park company is circling the drain. We’ve already received numerous details on the twelve new attractions coming to the parks, but on Tuesday morning SeaWorld is planning a media blitz with three press conferences back to back revealing tons of new details, including showcasing the ride vehicles from both the new rides at SeaWorld Orlando (Infinity Falls) and Sesame Place (Oscar’s Wacky Taxi). SeaWorld has also confirmed we’ll learn further details on two new Sesame Street parades.

There are plenty of rumors surrounding the future of SeaWorld Parks, especially regarding the two Busch Gardens parks. We’ll learn about the new VR attraction headed to Busch Gardens Williamsburg, but it’s still unknown if we’ll learn anything about Busch Gardens Tampa. The rumored enclosing of Sand Serpent has supposedly been put on the back burner as the park grapples with cost-cutting initiatives. Those same cost-cutting efforts might mean Busch Gardens Williamsburg’s The Curse of the DarKastle ride might go dark for good. The 3D based dark ride, similar to Islands of Adventure’s Spiderman ride, closed in late summer to become a haunted house for Williamsburg’s Howl-O-Scream. Now the ride is being used as a Christmas meet-and-greet walkthrough attraction for their Christmas Town event. There’s no word yet on if SeaWorld Parks plans to reopen the attraction, but there will be plenty of media asking just that come tomorrow.

SeaWorld has given some details of their international expansion plans in both mainland China and the Middle East. We may hear new aspects of the Abu Dhabi indoor park and possibly some broad stroke details regarding the Chinese expansion, though specifics for the China parks will likely not come for a few more years.

With SeaWorld’s recent sale of some of their orcas to a park in Spain that has leased them for years, we might be moving into a phase for the company where we see them offload some of their animal collection. That would better position the company of a potential buyer. It’s unlikely we hear specifics of a buyout this week but what SeaWorld does announce regarding the future of the company will be a great way to see what to make of these buyout rumors.

And we can’t forget the tentatively approved class action lawsuit that will pit SeaWorld against its shareholders over what the company knew and when regarding the impact of the controversial documentary Blackfish. The judge on that will finalize his decision after today’s hearing.

Hulk Hogan made a big deal announcing he’ll be at the International Attractions Expo this year. His new 4,000 square-foot. is readying to open just up the street, and he’s looking to expand his brand to new markets. Rumors of his 1980s-inspired water parks have been around for months now.

While we may hear some details of those plans, its unlikely a specific location has been set yet. Instead, this year we will more than likely hear about the new experiences at his I-Drive surf shop. won’t allow something too large, so it's probably a VR-based attraction. One confirmed attraction will be a small green screen studio booth where guests can record a wrestling promo video. We also know that there will be new wax figure-style statues, including a life-sized version of Andre the Giant, which Hogan himself confirmed was in the works a few months back.

Back in May, Dynamic Attractions announced that it had “received a USD $120 million, multi-year, multi-theme park ride system series of contracts with one of the leading, global theme park owners. These contracts will largely be executed over t he next 4 years.” It’s believed that we’ll be learning who this might be. The leading contenders are Six Flags and NBC Universal.

In August, Dynamic Attractions announced a $31 million co-venture initiative that will help open new Dynamic Attraction flying theaters and other “proprietary attractions, at key tourist venues in North America and China.” We may hear new details of the first phase of those new attractions, including the possibility of some right here in Orlando.

A significant leadership update was announced at the end of July. This will be the first IAE since the new leadership took over.


This Utah based ride design company is owned by Japanese ride and elevator manufacturer Sansei Technologies. Sansei has a long history of working with companies like Disney. S&S is mostly known for its tower rides and unique coasters. In 2002, it purchased the assets of Arrow Dynamics. Arrow was a major player in roller coaster design throughout the last half of the 20th Century. From Disneyland’s Matterhorn to the world’s first log flume the company made a name for itself for thinking up never before done rides. The world’s first modern inverting coaster and the world’s first modern suspended coaster both helped make Arrow a legendary company. When they shut down in 2002, Arrow left behind numerous ride designs that have yet to be truly replicated. For a few years after the purchase S&S had a division just for the Arrow rides, but today only Arrow’s 4th dimension coaster is still in production. 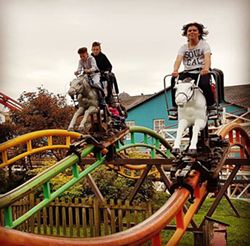 That is until now. S&S has announced that they will be bringing back the Steeplechase racing coaster. The ride, which typically has a horse looking single or double rider vehicles, has riders race each other with numerous tracks that sit side-by-side. The only existing Steeplechase ride from the Arrow era is at Blackpool Pleasure Beach in the U.K. We should learn about how the new version will be similar to the old one and what will make this new one different. It’s not likely we’ll learn specifics of where it may be going.

With the Steeplechase plans revived some are speculating that S&S might be reviving other Arrow designs, including their interlocking loops design or possibly their famed dark ride division (Arrow is credited with designing the ride systems for numerous Disney rides including Peter Pan’s Flight, Mr. Toad’s Wild Ride, Mad Tea Party, it’s a small world, and Haunted Mansion).

The sexual misconduct allegation storm that’s pulling down legends across the entertainment industry hit the tourism industry late last week when legendary theme park designer Gary Goddard was accused of sexually molesting boys as young as 12. Similar allegations surfaced against the theme park designed in 2014 when he was included in two cases involving X-Men director Bryan Singer. Gary Goddard, through his publicists, has denied the allegations but the company has remained quiet.

Gary Goddard has been around the entertainment industry for decades. He directed the 1987 He-Man film Masters of the Universe and has worked on numerous shows over the years, but he’s best known for his work in themed entertainment. He began as a directory for Disney World’s Hoop-Dee-Doo Musical Revue. He’s created with several iconic attractions that have called Central Florida home including The Amazing Adventures of Spider-Man at Islands of Adventure, the recently closed T2 /3D: Battle Across Time, the Jurassic Park River Adventure, and Kongfrontation.

After the most recent allegations by Anthony Edwards surfaced The Goddard Group, that Gary founded and currently serves as the CEO of, had their social media accounts disappear. Their site went down but was up as of Sunday night. Press releases from 2009 looked to be the most recently available on the site and Gary Goddard's section of the site looks to be from 2008.

With less than 24 hours until the showroom floor opens for the largest theme park expo in the world the biggest question in town is, ‘What will the future of The Goddard Group be?’

In recent years the company has used the same booth that features large pictures of their various projects along with quotes from Gary Goddard and his image. A giant ‘G’ is the central focus of the booth. The official map for the IEA still shows The Goddard Group with their large corner booth.

With the allegations of the CEO molesting children as young as 12 The Goddard Group is in an odd place where no matter what they do come tomorrow morning it will surely be news.