Theater Review: 'Orphans' at Theater on the Edge is hilariously heartwrenching

Orlando’s theater community may never match Manhattan’s or London’s for depth and breadth, but if Theater on the Edge has anything to say about it we could be known as the Chicago of the South. This sister troupe to Truthful Acting Studio started strong last year with a series of gritty, naturalistic productions that recalled the early glory days of Theatre Downtown. With the hilariously heartwrenching Orphans (which runs in their intimate 30-seat SoDo venue through Nov. 27) this sophomore company moves beyond the “promising” stage and cements their status as the new Steppenwolf of Central Florida.
Playwright Lyle Kessler, who debuted this black dramedy in 1983, isn’t a household name like David Mamet and Tracy Letts, but his concerns overlap with those authors of previous Theater on the Edge productions. All focus on profane antiheroes on the fringes of urban America, seeking to climb the slippery economic ladder while searching for absent parental figures. In Orphans, troupe mainstay Zack Roundy once again plays a wild-eyed overgrown adolescent who ignores social norms in pursuit of his goals. This time, he’s Treat, a petty thief who robs his North Philadelphia neighbors to support his developmentally disabled brother Phillip (Adam Minossora), and to satisfy his violent temper. Treat escalates to kidnapping a drunken businessman, but gets more than the briefcase full of bonds he bargained for when reverse Stockholm Syndrome swiftly sets in, and his victim, Harold (Allan Whitehead) becomes the substitute father – or rather, godfather – both boys badly crave. Unfortunately, happy endings are hard to come by when you’re a “dead end kid,” so you can count on brutal physical and emotional violence before the final curtain, interspersed with some wonderfully inappropriate laughter. 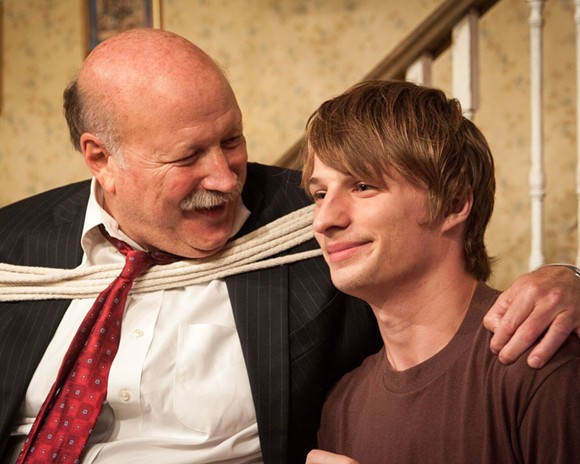 Under the patiently paced direction of producer Marco DiGeorge, Roundy and his fellow Theater on the Edge ensemble member Whitehead are again both excellent, building characters that are theatrically exaggerated yet still recognizably human through countless layers of physical detail; watch the way Treat’s fingers fidget as he struggles to restrain his anger, or how Harold’s bearing morphs as he seizes control of the situation. And designer Samantha DiGeorge’s set should again take a bow as a coequal actor; the brothers’ run-down row home is hypnotically hyper-realistic in its late-80s details, from the narrow doorways and steep staircase (a nifty trick in a single-story theater), down to the period labels on the mayonnaise jars.
But the real news here is Minossora, who inhabits Phillip fully without ever seeming condescending to his handicap. Phillips exact form of autism spectrum impairment is never specified, but Minossora’s movement patterns and vocal ticks feel far more organic than the lead in the lauded Curious Incident of the Dog in the Nighttime touring production. More importantly, he makes Phillip a full-fledged character rather than a just collection of tricks. Watching him blossom from frightened fragility into fierce independence is one of the few rays of sunlight in this otherwise bleak fable about how Darwinistic capitalism always undermines justice and empathy, despite our efforts to connect with each other.