As one of more than 64,000 students who attend the University of Central Florida, Karen Caudillo stresses about tests, classes and graduation just like everyone else. But in between earning her bachelor's in political science and dreams of becoming an environmental lawyer, the 21-year-old from Naples worries about her family being deported to a place far from the life they've created here.

Caudillo is one of about 33,000 Florida recipients of the Deferred Action for Childhood Arrivals program, also known as DACA. The Obama-era program protects around 800,000 undocumented youth from deportation and gives them a chance to work legally. President Donald Trump's administration  rescinded DACA in September and gave Congress until early next year to put together legislation before protections are phased out. After attending her first rally for undocumented youth last August in Orlando, Caudillo traveled in September to Washington D.C. where she fasted outside the U.S. Capitol for a law that would allow her to stay in the country she's known since she immigrated from Mexico as a 4-year-old. A video of the UCF student's interview with reporters went viral and subjected her to unprecedented online support and attacks.

‘I’m gonna be sent back to a country that I’ve ever been to and I’m gonna lose every opportunity that I have.’ pic.twitter.com/JWzDsYfoSf

Last week, Caudillo channeled that pain into a rally by organizing her first sit-in alongside fellow UCF students calling for a "clean" DREAM Act, meaning legislation that does not have added policies that could hurt other immigrants. Caudillo and other students also want to make sure the next UCF president after current UCF President John C. Hitt retires is as supportive of undocumented youth.

"I want Congress to know that we're not a bargaining chip," she says. "I'm not going to accept a DREAM Act that goes and persecutes my family, my community and people out there. … I'm doing whatever I can to make sure we support every single Knight here at UCF."

Orlando Weekly asked Caudillo some questions about what it's like to be a nationally recognized face in the fight for undocumented youth. The interview below has been edited for clarity and length.

Orlando Weekly: A month ago you went viral. What has that been like?

Karen Caudillo: It was interesting. I think I received a lot more support than hate but at the same time, I did get doxxed by Milo Yiannopoulos. It was interesting because he published all my personal information, my home address in Naples, my business name, everything that anyone really could find out about me – even creepy things like my boyfriend on Instagram.  Just really uncomfortable things that shouldn't be published just because it's personal. I was also hacked by 4chan. That's pretty horrible, but then I realized, I must be really changing some hearts that people that don't know me are threatening me like that.

OW: How do you explain that to your parents?

KC: My parents understand that things are going to happen, but they trust me. They know that I wouldn't do anything that I didn't think was going to benefit us in the long run. ... They're 150 percent supportive. They're very religious, so they understood you have to go through rough patches in order to get to better times.

OW: When did you get DACA?

KC: I got DACA in 2012. I was very privileged to have benefited from everyone else's struggle and fight. I was a junior in high school, so I was able to get my driver's license and play sports and have as normal a teenage life as any other American. DACA allowed me to apply for a full-ride scholarship. … When I graduated in 2014 and I got that scholarship, it was also the first year that in-state tuition for undocumented students in Florida passed. I was privileged to the max. I didn't have to suffer. And now it's my opportunity to play a role and pass the baton to the younger generation to do whatever I can't – to fight for them so they can keep fighting for our parents and for everyone else. 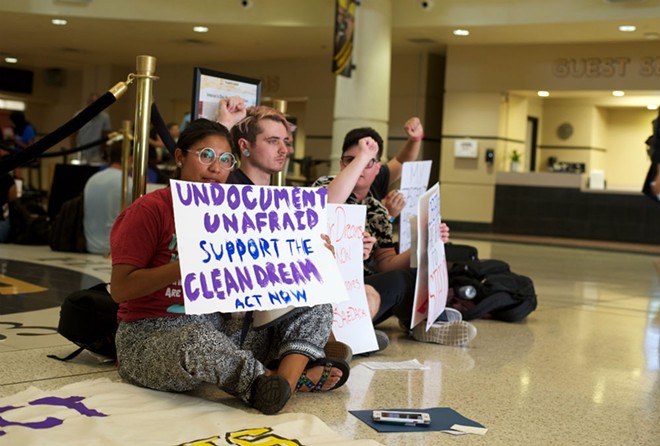 OW: What did it feel like to do activism for something so personal?

KC: It feels empowering because living in this racial post-era in the most Southern state makes Dreamers and immigrant youth feel ashamed to be a minority. It makes them have identity issues It makes them feel like we don't belong here even though a lot of us are indigenous in our roots. I want to empower all the other youth to come out and join the fight because we weren't just given all these things – we fought for them. There's people that walked from Miami to Washington D.C. to ask President Obama for his action. There are youth all over getting arrested for a clean DREAM Act. We need to make sure they hear us loud and clear that we're here to stay and that we're not going to go down without a fight. We're willing to put ourselves and our lives on the line because they already are.

OW: What did it feel like to go up to Washington D.C. to protest?

KC: It make me remember who I really was. It made me remember why I needed to fight. When you meet all the people that are doing the day-to-day battles, you realize that it's not about me – it's about the community. It's about the children that are young and scared that their parents won't come home and they would be thrown into foster care. It's for my cousin who's 16 and who might not be able to apply for college. It's to keep the American Dream going. … I had my uncle deported, and I was the only person who could go see him in handcuffs and shackles on his feet, knowing he didn't do anything wrong. He was a professional clown, and he made children laugh. I had to see him get sentenced to deportation and get treated like a dog, like an animal.

OW: Are you worried about being arrested?

KC: Yeah, but Orlando is thankfully a lot more supportive of immigrants. We have a high Puerto Rican population, we have a high Hispanic population, so I feel comfortable here. But I'm worried for those who are in rural areas and will possibly be persecuted. I'm just worried for everyone else.

OW: Have you made a plan with your family yet?

KC: Yeah, we have a plan. I have a sister who's 15. If anything happens, I'm responsible for her. It's sad because she's so close to being an adult, and I just want her to have the life that I had with no worries, but I can't promise her that. That's something that keeps me up at night, you know?

OW: Obviously it's a lot of emotional work. What do you do for self care?

KC: I meditate a lot. My boyfriend – he's my rock. I remember when I told him at three months of dating that I was a DACA student. I just started crying one day, and I was like, "I feel like I cant be myself around you anymore. I don't know what this means and all I know is this is my status."  And he just held me and was like, "This doesn't mean anything to me. You're going to be fine, and I'm going to stand with you." He understands we were all immigrants at some point or brought here through enslavement or indigenous to this land. It doesn't matter. Just like the butterfly migration, it can't be stopped –no border, no Homeland Security. Migration is migration. It doesn't matter where you're from.