One of the New York Times' most distinguished reporters, White House correspondent Glenn Thrush, has been suspended by the newspaper after several female journalists accused him of sexual harassment in a Vox report.

Four women in the Vox article, including its author, alleged that Thrush, a prominent reporter at Politico before joining the Times earlier this year, conducted inappropriate sexual behavior toward them, including unwanted kisses, groping and "hazy sexual encounters that played out under the influence of alcohol." The journalists also alleged Thrush disparaged them to their colleagues after unwanted sexual advances. An anonymous 23-year-old woman reportedly said Thrush presented himself as "an advocate for women and women journalists," but for her, a colleague’s going-away party in June "ended on a Washington street corner, where Thrush left her in tears after she resisted his advances."

The next day, the 23-year-old's friend and our new local badass Orlando Sentinel reporter Bianca Padró Ocasio, who worked for Politico at the time, heard her friend's story and reached out to Thrush in a series of savage text messages obtained by Vox.

"I want to make sure you don't lure young aspiring women journalists into those situations ever again," Padró Ocasio told Thrush, according to screenshots from Vox. "So help me out here. How can I do that?"

Thrush responded that he "[didn't] lure anybody ever," and is "acutely aware of the hurdles that young women face in this business and have spent the better part of 20 years advocating for women journalists."

Orlando Weekly reached out to Padró Ocasio, but she declined to comment further. 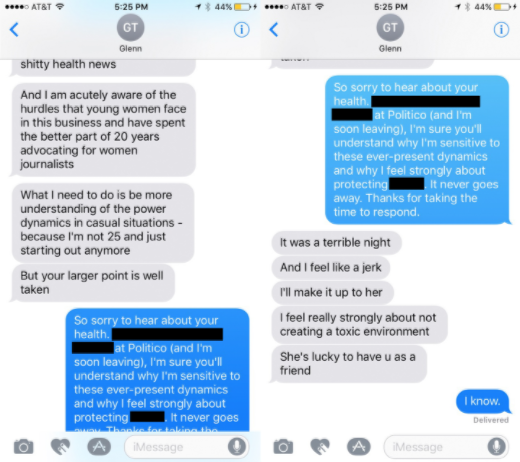 In a long statement to CNN, Thrush said he apologized "to any woman who felt uncomfortable in my presence, and for any situation where I behaved inappropriately." The statement continues:


"Any behavior that makes a woman feel disrespected or uncomfortable is unacceptable.

My recollection of my interactions with Laura differs greatly from hers – the encounter was consensual, brief, and ended by me. She was an editor above me at the time and I did not disparage her to colleagues at POLITICO as she claims. The assertion that I would rate women based on their appearance is also false.

I have never offered mentorship or reporting advice to anyone, man or woman, with an expectation of anything in return. To assert otherwise is false.

The June incident related in the story was a life-changing event. The woman involved was upset by my actions and for that I am deeply sorry.

Over the past several years, I have responded to a succession of personal and health crises by drinking heavily. During that period, I have done things that I am ashamed of, actions that have brought great hurt to my family and friends.

I have not taken a drink since June 15, 2017, have resumed counseling and will soon begin out-patient treatment for alcoholism. I am working hard to repair the damage I have done."

Get yourself a friend like Padró Ocasio – a person who won't leave you in dangerous situations and is willing to stand with you against the most influential people in the industry. That's a friend for life.