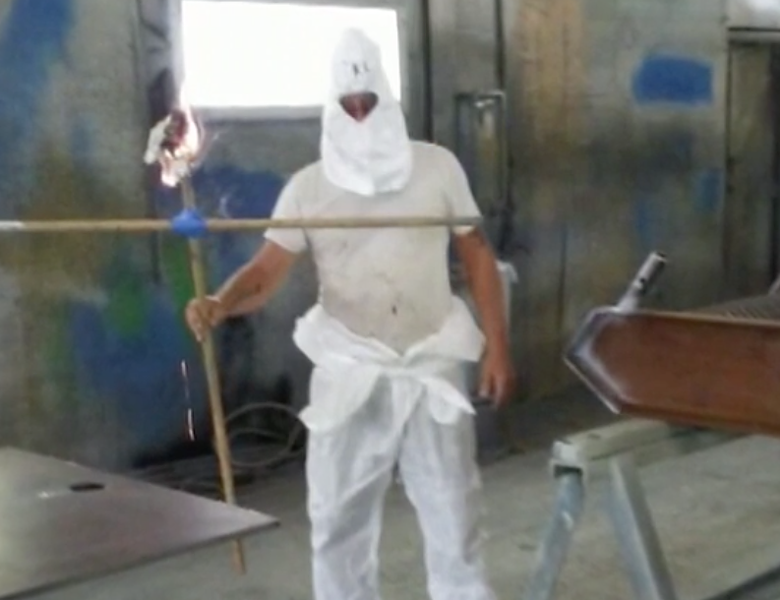 Following what might amount to a stunningly tone-deaf attempt at humor and a stunningly silent corporate response, Orange County resident John Shipley has filed a complaint with the Equal Employment Opportunity Commission. As News 6 reports, Shipley claims he was recently subject to discrimination when a supervisor approached him dressed as a KKK member holding a burning cross.

According to Shipley, who is black, the incident took place just a month after he was hired as a temporary employee with Gencor Industries, a large manufacturing organization. As Shipley was sanding metal, his supervisor, Jeff Crandall, appeared near Shipley wearing a mock KKK outfit.

"It's a hood that we wear when you're sandblasting, and it had 'KKK' written on top," said Shipley, in an interview with News 6. "He actually put two paint sticks together, taped them up like a cross, took one of our rags that we use for cleaning up, and lit it on fire."

At first frightened, Shipley then noticed two of his Caucasian coworkers laughing. And so he took a picture.

"I pulled out my camera and said, 'Here, pose.' And he posed like he was proud of it."

Today, Crandall isn't as proud. But he maintains he was acting in good fun. "It was a joke. A big joke," Crandall told News 6. "(Shipley) knows that...It [was] kind of like a Halloween thing."

Shipley took his photo of the "Halloween thing" to Gencor's HR department, but instead of receiving adequate attention, he says he was swept off to the night shift. Three months later, his position with the company ended.

To date, Shipley remains shocked by the incident. "I thought something like this might happen in the rural country or backwoods," he said. "But not here in Orlando. Not in this day and time. Not with a company like Gencor."

Despite repeated attempts at contact by News 6, Gencor is yet to address the incident publicly.

Shipley's complaint filed with the EEOC is currently under review, as is an additional complaint filed with a state agency. According to the EEOC, race discrimination includes "racial slurs, offensive or derogatory remarks about a person's race or color, or the display of racially-offensive symbols."