It’s been nearly half a year since Disney first announced major new additions coming to the Magic Kingdom and Epcot. While rumors of these new additions had been around for years, it wasn’t until Disney’s in-house fan convention D23 in July that we got official confirmation of the Tron coaster, the Magic Kingdom theater, and the Ratatouille ride.

Along with the announcement, Disney released some concept art that gave us our first concrete ideas of what these new attractions will look like. But it's not uncommon for a project to evolve after the concept art is released so many questions have remained unanswered since July. That is until this week.

On Friday the South Florida Water Management District posted Environmental Resource permits for “Epcot Back Of House France” that gives us some of the best details yet on the changes we’ll see for Ratatouille. These plans were then followed up on Monday with another Environmental Resource permit, this time for “Magic Kingdom East Side Modification.” This single permit shows us the most detailed information yet on both the new Main Street Theater. 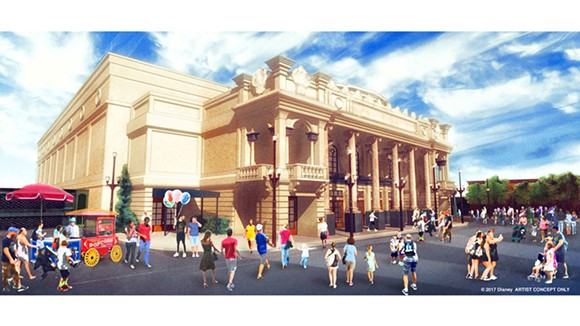 One of the most surprising details revealed in the plan is just how far back the new Main Street Theater will sit. The new theater will go behind Main Street in an area that’s currently used as Cast Member parking and an ever-so-slightly themed Main Street bypass. The theater will sit roughly 150 feet back from the current back wall of the pre-existing Main Street buildings. This will create a large courtyard space in front of the theater, estimated to be around 30,000 square feet.

Such a large area will allow for better guest flow as shows are letting out, but this area may also have kiosks or other items breaking it up. The theater courtyard looks to be accessible from not only the north entrance, which will be in-between the Plaza Restaurant and the Tomorrowland Terrace, and the south entrance, found in-between The Chapeau and Tony’s Town Square restaurant, but the plans seem to indicate that the dead-end Center Street found halfway up Main Street will also connect to the new courtyard. With the theater sitting so far back it looks to be possible for it to empty guests out of one side of the theater near where the former Galaxy Palace Theater in Tomorrowland was located. This might mean that Disney would have the option to have guest exit through Tomorrowland while the next set of guests wait in the theater courtyard out front. The water management plans only show impervious updates. So while we have the exact foundation outline of the new building, we still have little in the way of interior layout or guest flow plans.

Understanding what these water management plans actually show is more important when we look at the TRON building next door in Tomorrowland. The permits show a building sitting roughly 130 feet behind the train tracks. At first glance, be in stark contrast to the concept art which showed the train passing under a giant, cloud-like, skylit roof membrane. The roof may still be in the majority of the area underneath it is technically permeable. The plans also tell us that the rumors of the Tomorrowland Speedway being shortened or otherwise changed are untrue. The TRON building looks to be nearly identical to the one in Shanghai.

Over in Epcot, the long-rumored location of the Ratatouille ride was confirmed. The building will the current pavilion with guests using a new pathway that runs alongside the pavilion with brand new views of the canal. The Ratatouille ride will be in its own isolated area. A new bathroom building and a covered outdoor extended queue area are also included. This does confirm that the Impressions de France film attraction will not be replaced by Ratatouille, but Disney has yet to confirm if it plans to keep the current film or update the film, similar to how they’re doing with China’s film. The new guest pathway and the Ratatouille square will be visible from the Disney Skyliner gondola transit system. The Epcot station will be located just across the canal near the International Gateway entrance into the park.

All three projects are expected to break ground by this summer with all three opening in time for the 50th Anniversary in 2021.