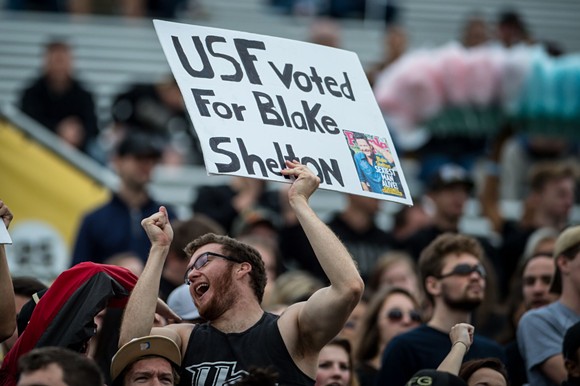 Tampa City Hall will fly the UCF Knights flag after losing a bet on who would win the historic "War on I-4" college football rivalry between the Knights and USF Bulls.

The Knights dominated the Bulls 49-42 last Friday in front of thousands at the University of Central Florida’s Spectrum Stadium and won the title in the American Athletic Conference East Division. For the first time, the UCF football team also achieved an undefeated regular season.

Orlando Mayor Buddy Dyer and Tampa Mayor Bob Buckhorn made a friendly bet on the game wagering local beer and flying rival flags at their respective city hall. If the Knights won, Buckhorn promised to send Cigar City beer and Ybor cigars to Dyer. If the Bulls won, Dyer would send Tampa's mayor Orlando Brewing beer and an Orlando-made cornhole board from Victory Tailgate.

By Monday, the UCF Knights flag was already on its way to Tampa.

No shame at all Mayor! Two great teams who played a game that will be remembered for decades. Wishing USF best of luck in their bowl game.

Tampa looks good in all that black and gold, doesn't it?

The Gist ucf knights usf bulls war on i-4 Video