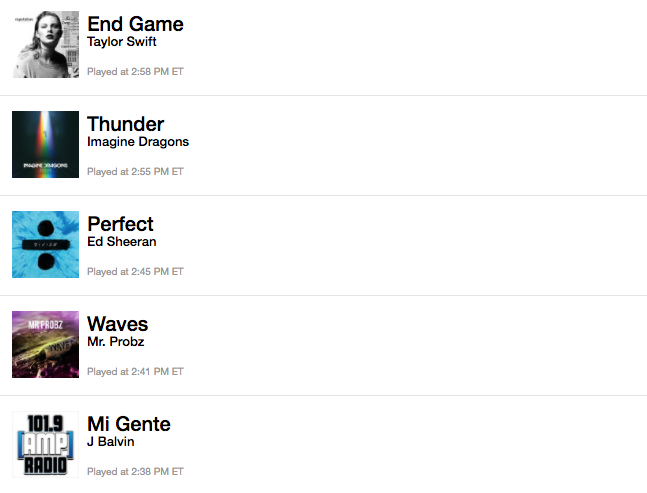 Yesterday, at 2:58 p.m., 101.9 AMP ended its run in Orlando by playing Taylor Swift's "Endgame," a fitting end for one of Orlando's better pop radio stations.

The station, known for playing Top 100 Billboard hits and a decent amount of Spanish pop songs, quietly switched over at 3 p.m. to an "alternative" format and will now be known as ALT 101.9, "Orlando's New Alternative."

Alternative is a pretty vague genre, but based on their most recent play history, the new station seems to define it as slightly moodier pop, peppered with a few '90s rock songs.

Morning host Chad Pitt wrote about the format change on his Facebook page, and mentioned that there were layoffs. "On a personal note, not many people get to 'come home again,'" said Pitt. "I've loved every single moment being back in Orlando. This city will always have my heart."

A full statement the parent company Entercom regarding the format change was posted to RadioInsight.com:

The launch of ALT 101.9 FM comes shortly after Entercom’s transformational merger with CBS Radio and expands on the company’s position as the #1 creator of live, original local audio content in the United States. “In a city with a rapidly evolving demographic, we are thrilled to fill this void in radio in Orlando,” said Pat Paxton, Entercom’s President of Programming. “ALT 101.9 FM caters to the tech-savvy, engaged and active Orlando audience and will provide an exciting and unique experience for listeners who are currently underserved with today’s radio choices in Orlando.” ALT 101.9 stands alone as the only locally curated alternative rock station in Orlando and serves passionate music fans in the market who are online and always on the go.