by Monivette Cordeiro and Xander Peters 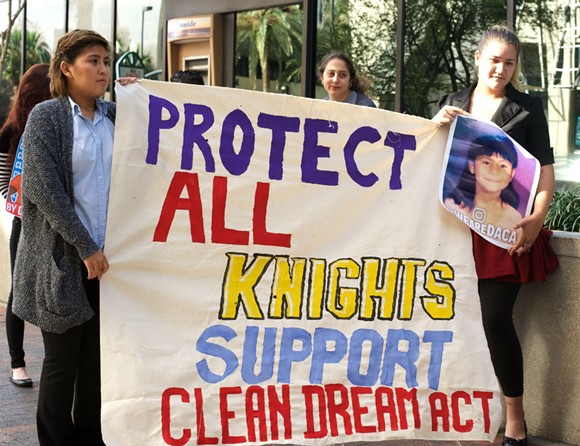 Undocumented students from the University of Central Florida staged a short sit-in Monday morning at U.S. Sen. Marco Rubio's office in downtown Orlando before being kicked out.

The immigrant youth want the Republican senator to vote against any omnibus spending bill that does not include "clean" DREAM Act for DACA recipients. DACA, or Deferred Action for Childhood Arrivals, is an Obama-era program that protects around 800,000 undocumented youth from deportation and gives them a chance to work legally. To activists, a "clean" DREAM Act would not increase funding for immigration enforcement, build a border wall or expand the private prison and detention centers system. President Donald Trump's administration rescinded DACA in September and gave Congress until March 5 to put together legislation before protections are phased out at a rate of almost 1,000 permits a day. The Washington Post reports lawmakers agree they must reach a deal before December ends because bipartisan consensus during election season would be hard to achieve.

On Monday, two undocumented students and six of their classmates walked past security at the door of the private building at 201 S. Orange Ave. where Rubio's office is located. UCF student Karen Caudillo, who is undocumented, says they tried to go inside Rubio's office to give him a letter but were not let in. Instead they sat outside the door for about 10 minutes until a building security guard showed up.

"Because we do have finals, we wanted to make sure we weren't getting arrested," she says. "The security guard told us because you're not in [Rubio's] office, you're not on public property, so if the cops come, you're automatically arrested for trespassing."

Orlando Weekly reached out Rubio's office for a comment but did not immediately receive a response. The UCF students were also encouraging Rubio to protect undocumented people without DACA status and TPS recipients.

"They’re trying to pass a spending bill and they need Democratic support," says Kenan Mora, another undocumented UCF student. "We’re asking Marco Rubio to not vote for any spending bill that does not include a DREAM Act. As Dreamers, as UCF students, it’s an extreme amount of stress and anxiety living under uncertainty."

Rubio, who at the forefront in 2012 on a version of the DREAM Act that never passed, has stayed mostly on the sidelines in current conversations regarding undocumented youth and the DACA program, which he considers unconstitutional. The Tampa Bay Times reports Florida's junior senator has previously said he "supports protecting the Dreamers but isn't involved in legislative efforts."

Caudillo says Rubio should think of his own family members when he ponders the fate of undocumented youth.

"I want him to think of his parents and imagine not growing up in the United States and not having these opportunities that he has now," she says. "I want him to think of what our lives will look like in the months coming as we possibly go back into the shadows. … It's now or never because lives are at hand, and we want to make sure [Rubio] is on the right side of history. At the end of the day, we don't want him to be seen as a senator who let his immigrant youth constituents get deported."