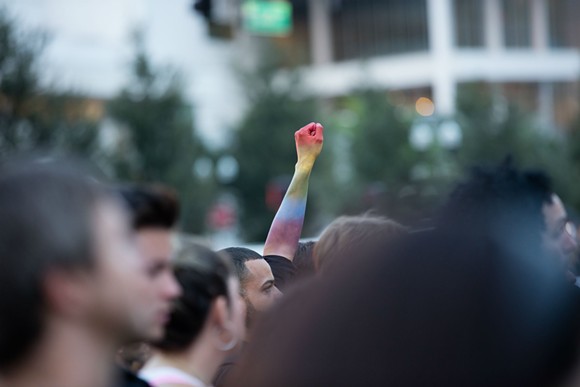 On Monday, the anti-LGBTQ organization Liberty Counsel filed a suit in federal court against the city of Tampa for prohibiting the use of gay conversion therapy for minors.

The hard-line conservative, evangelical group based in Maitland alleges a violation of their First Amendment rights, deriving from Tampa City Council's unanimous decision to adopt Ordinance 2017-47 back in March.

Under the ordinance, "any counseling, practice or treatment performed with the goal of changing an individual's sexual orientation or gender, including, but not limited to, efforts to change behaviors, gender identity or gender expression, or to eliminate or reduce sexual or romantic attractions or feelings towards individuals of the same gender or sex" is forbidden.

Though there are exemptions for those affiliated with religious organizations who are not licensed therapists, fines for professionals caught engaging in the practice can go as high as $1,000. Fines can range up to $5,000 for repeat offenders.

According to a statement by the Liberty Counsel, available here, the ordinance "violates the First Amendment by imposing a viewpoint and content-based prohibition on the speech of licensed professionals in Tampa who offer change counseling."

Liberty Counsel founder and chairman Mat Staver continued the group's statement by saying, "The Tampa law is a gross intrusion into the fundamental rights of counselors and minors, and represents government intrusion into the sacrosanct relationship between a counselor and a client."

Gay conversion therapy — what's also been dubbed as "reparative therapy" or "sexual orientation therapy" — has been increasingly banned across the state of Florida (and the world), in large part cited as an overwhelmingly harmful practice.

The Liberty Counsel calls itself "an international nonprofit, litigation, education and policy organization dedicated to advancing religious freedom, the sanctity of life and the family since 1989."

According to the Southern Poverty Law Center, Liberty Counsel is a legal organization that advocates for anti-LGBTQ discrimination "under the guise of religious liberty," and is considered a hate group.