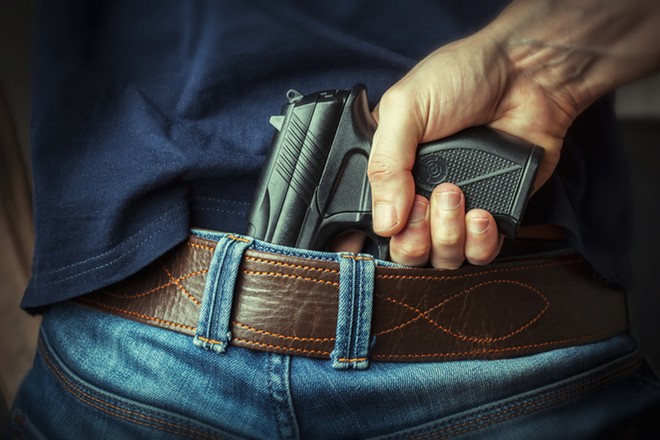 With the 2018 legislative session still more than a month away, gun-related measures might have died Tuesday in the state Senate.

The Senate Judiciary Committee, which has been a stumbling block in recent years for Second Amendment-related bills, narrowly rejected proposals that sought to allow Floridians with concealed-weapons licenses to carry firearms up to the entrances of courthouses (SB 134); inadvertently display handguns (SB 148); and pack heat at religious institutions that include private schools or day-care facilities (SB 274).

Also, committee Chairman Greg Steube, a Sarasota Republican who sponsored two of the proposals, said after the meeting he has no intention of reviving some more-controversial measures from past years. Those measures sought to allow people with concealed-weapons licenses to openly carry firearms and to carry guns into airport terminals and on university and college campuses.

Tuesday's votes came as lawmakers hold committee meetings to prepare for the 2018 session, which starts Jan. 9. Opposition on the Judiciary Committee to the gun-related bills came — as it has in the past — from Democrats and some South Florida Republicans.

Sen. Rene Garcia, R-Hialeah, said he couldn't support gun-related measures that fail to address mental-health issues. Also, he said the Senate should stick with a compromise it reached during the 2017 session on guns at religious institutions. The Senate compromise was rejected by the House.

“It's not about the policy, but the process, and about what I think we as a Senate should be standing up for and holding our position,” Garcia said.

The Senate version during the 2017 session would have allowed people with concealed-weapons licenses to carry guns at religious institutions outside of school hours or when school activities weren't occurring.

After Tuesday's meeting, Sen. Anitere Flores, R-Miami, agreed with Garcia that the compromise language should have been maintained.

Flores, who voted against all three bills, also said a change was needed on the bill dealing with allowing the inadvertent display of handguns. Such a change would indicate the temporary display was conducted in a “non-threatening manner.”

“Right now, the way that bill reads is, it allows temporary and openly displaying; that would allow brandishing, and that is a concern of mine,” Flores said.

National Rifle Association lobbyist Marion Hammer, who called the religious-institution proposal a private property-rights measure, said with 2018 an election year it's important to know who isn't being truthful in their support of Second Amendment issues.

“We had Republicans who joined the Democrats as obstructionists last year, and bills would be (temporarily postponed), which was a type of protectionism for Republicans,” Hammer said. “This year, thankfully, they voted. They've been outed, and now we can report it.”

Sen. Debbie Mayfield, R-Rockledge, argued in support of the religious-institution measure to prevent a repeat of carnage that occurred last month at a church in Sutherland Springs, Texas.

“What we have in place right now, people are getting killed and there is no one there to stop them,” Mayfield said.

On Nov. 5, 26 people were killed and 20 others were injured when a gunman started firing into a Baptist church from across the street, before making his way into the building. The gunman, who later died of a self-inflicted wound, was shot twice as he exited the church.

Sen. Kelli Stargel, a Lakeland Republican who sponsored the religious-institution proposal, said the two sides in the debate might never come to an agreement.

“The real compromise we're looking for is between two very different schools of thought,” Stargel said. “One is, having less guns in the community is going to create less crime and less violence. And the other school of thought is my school of thought, which is personal responsibility, which is I don't want to designate to somebody else my responsibility to protect myself and my family.”