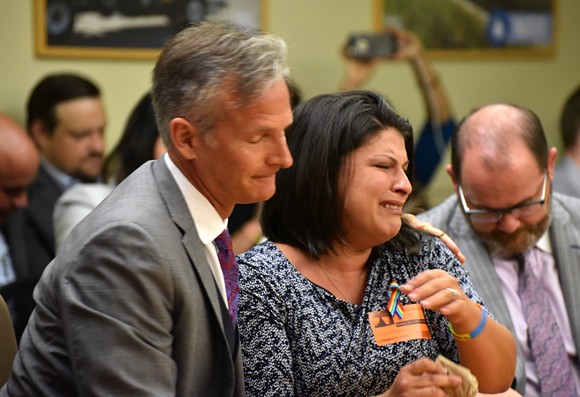 Gerry Realin, a Pulse first responder and former Orlando police officer, filed a civil lawsuit against the city of Orlando and the Orlando Police Department on Friday morning.

Realin was among the members of a hazmat crew that removed the 49 dead bodies from the Pulse nightclub following the June 12, 2016, mass shooting.

The charges allege that OPD violated Occupational Safety and Health Administration standards by not providing Realin and his fellow officers with proper safety equipment, such as eye protection, during the five hours they tended to the crime scene inside the club.

"OSHA standard precautions concerning blood-borne pathogens were disregarded, ignored, violated and overlooked during the cleanup operation of the Pulse massacre by OPD," the lawsuit reportedly says.

Realin decided to leave OPD about a month after the Pulse massacre and was soon after diagnosed with post-traumatic stress disorder, rendering him unable to return to work at the department.

The lawsuit alleges that Realin was then harassed by fellow OPD officers, including Deputy Chief Orlando Rolon, over his mental condition and inability to return to the police force.

Realin's attorney, Geoff Bichler of Maitland, told News 6, "Maybe the most shocking is the fact that one of Officer Realin's superiors followed him to an appointment with a psychiatrist and then essentially tracked him down to a gas station after the appointment to confront him."

The lawsuit seeks in excess of $1 million in damages for alleged violation of Florida's Workers' Compensation Law.

In July, Realin was granted a full retirement pension — 60 percent of his salary for life — in an unanimous decision by Orlando's city board.