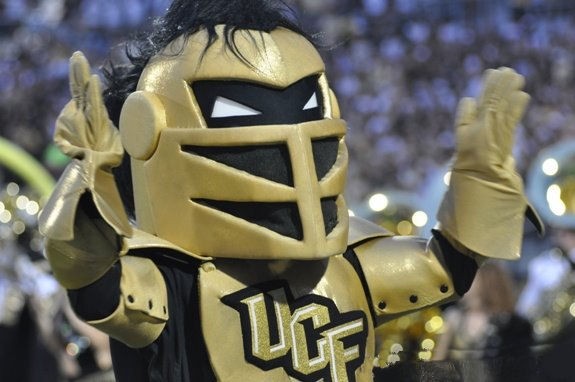 It's official: The UCF Knights are heading to a college football New Year's Six bowl game.

After a rather tumultuous end to the season, in which the Knights won an American Athletic Conference Championship and lost their head coach in the same afternoon, UCF has managed to snag a formal invitation to one of college football's most prestigious postseason outings. On New Year's Day, 2018, the undefeated, 12th-ranked Knights will face off against the seventh-ranked University of Auburn Tigers in Atlanta, Georgia, at the shiny new Mercedes-Benz Stadium.

The Orlando Sentinel reports that UCF fans have already set a record "as the first Group of 5 program to sell out its tickets in the College Football Playoff era," with the university's 12,500-ticket allotted amount of tickets already sold out since last Monday.

UCF will be led by now-former head coach Scott Frost, who's been at the program's helm for the past two seasons. Even though Frost has already accepted the position as head coach at his alma mater, the University of Nebraska, he's been given the blessings of both programs to coach the Knights for one last outing.

Last week, UCF athletic director Danny White announced the hiring of Josh Heupel to replace Frost. Most recently, Heupel served as the offensive coordinator and quarterbacks coach at the University of Missouri, where he finessed Mizzou's offense from one of the worst in the NCAA in 2016 to 13th overall this season.