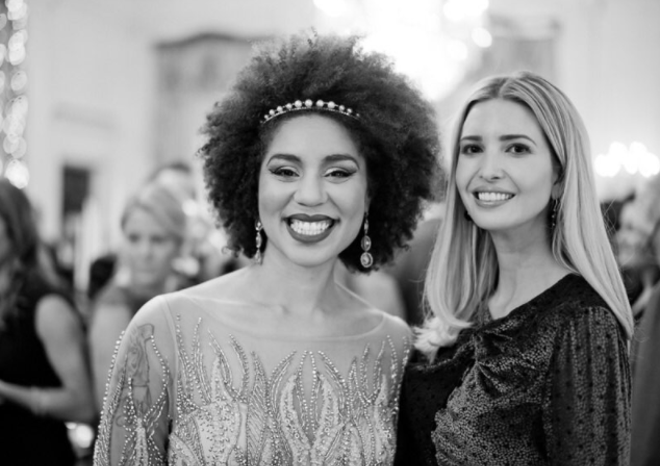 She added that although she will run as a political outsider, she plans to campaign as a member of the GOP.

"I'm looking everywhere from Jacksonville all the way down to Miami," she told the show's hosts. "Right now we are looking to all the areas. We are polling. We are seeing what's going to work. And hoping to scare some of those RINOs that are there to watch their back."

Villa was relatively unknown in the world of celebrity hoo-ha until she wore a "Make America Great Again"-themed dress to the 2017 Grammy Awards in February.

And while the anti-Trump callouts were plentiful in number at the awards ceremony earlier this year, with condemnations of the 45th president coming from folks from Laverne Cox to James Corden, it was Villa's pro-Trump endorsement by way of fashion that inevitably earned the most attention.

Following that, Villa's EP "I Make the Static" soon after made a leap to the No. 1 spot on iTunes and Amazon, temporarily topping pop-culture savants such as Beyoncé, Adele and Lady Gaga. With that, Quartz reports, the musician's following on Twitter increased by more than 11,000 within hours.

But it wouldn't stop there.

As if the fashion statement in itself weren't enough, Villa would go on to make a series of actual statements addressing her political aspirations during an appearance on Fox & Friends in October.

"I'm looking at Florida, I'm looking at California and I'm looking at New York, because these are all places I live and work and have grown up," Villa told Ashley Earhardt, a co-host of President Trump's favorite early-morning kumbaya.

In the same interview, she went on to condemn House Minority Leader Nancy Pelosi, Rep. Maxine Waters, D-California, and Rep. Frederica Wilson, D-Florida, saying, "It's time we have strong women who step up, run, win and support the president."

In true Trumpian fashion, Villa added at some point during the interview: "If I'm going to run, I'm going to win."

Tweeting his encouragement of the conservative B-list celebrity — most likely witnessing her testimonial in real-time — Trump wrote:

Good luck to @Joy_Villa on her decision to enter the wonderful world of politics. She has many fans!


To which Villa replied:

Thank you so much Mr. President, you have inspired ME to be great! You are my ultimate warrior role model.🇺🇸🇺🇸🇺🇸

Leaving the question of what constitutes an "ultimate warrior role model" aside, who is this latest outsider in American politics?

Born nowhere remotely close to Florida, in Burbank, California, Villa reportedly grew up as a "pastor's kid," the musician's website says, and her "mixed life" as a person of Italian-Argentinian and African-American-Choctaw heritage helped inspire her "unique perspectives on politics, society, education and black American culture."

She's been an avid enthusiast of music and theater since age 5, and her current self-proclaimed aesthetic as an artist combines alternative rock, pop and soul. To see for yourself, click here.

Villa is also a vocal member of the Church of Scientology. And when time affords itself, she moonlights as an author, model and vegan health coach, too …

Back to the political aspect: as "an unabashed conservative and Trump supporter," Villa calls herself a "Republican millennial." Her track record — well, at least her Twitter feed, where she makes claims along the lines of "abortion is murder"  — backs her up.

Like she so eloquently said during the October interview with Fox & Friends, "There's such a need for good congressmen, for good people in office who are putting forth the aims of the people, not just their own agenda."

And she's right. But, Joy, it could be argued that you're most definitely not one of them.

We will see, though. The sky's the limit in the guessing game of who will be Trump's next celebrity apprentice.