Florida's minimum wage is about to go up 15 whole cents 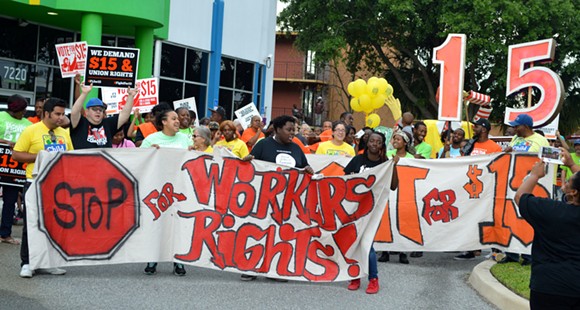 Let's explore a few of the reasons $8.25 an hour is an incredibly shitty wage to pay someone.

If you worked a 40-hour week at this rate, your annual income would be $17,160 before taxes, which is well below the federal poverty level of $24,250 for a multi-family household.

This means a working mom would need to log nearly 100 hours a week at her job to pay to be able to afford the average two-bedroom apartment in Orlando.

There's an actual term for this: "working poor." It means you're employed but you can barely afford to pay your bills, you can't afford health care, you probably don't have transportation and you're essentially just one accident away from sliding into bankruptcy.

The argument that will more than likely pop up in the comment section of this story is that low-paying jobs aren't meant to sustain productive members of society ("Hey, these jobs are for college kids!"), and it is complete horseshit.

Right now the jobless rate in Orlando is less than 4 percent, which is excellent. We have jobs! The only problem is Orlando currently ranks among the country's worst for income level, which is bad. These job don't pay shit! So we have a plethora of very low-paying gigs and I hate to break it to you, but college kids aren't filling all these jobs.

People aren't making enough to survive in Orlando. Earlier this year, a Census Bureau study released by American Community Survey showed that Orlando has a median household income of $52,385, which makes us the third worst city for income among the country's top 25 metropolitan areas.

But not only do we have piles of low-paying jobs, we also have an affordable-housing crisis. Last summer, a study from the National Low Income Housing Coalition found that 45 percent of this city's residents are renters, and of those people, the mean average income is $16.07.  Orlando renters should be making at least $20 an hour, which is equal to over $40K a year.

Or both. Both would be nice.