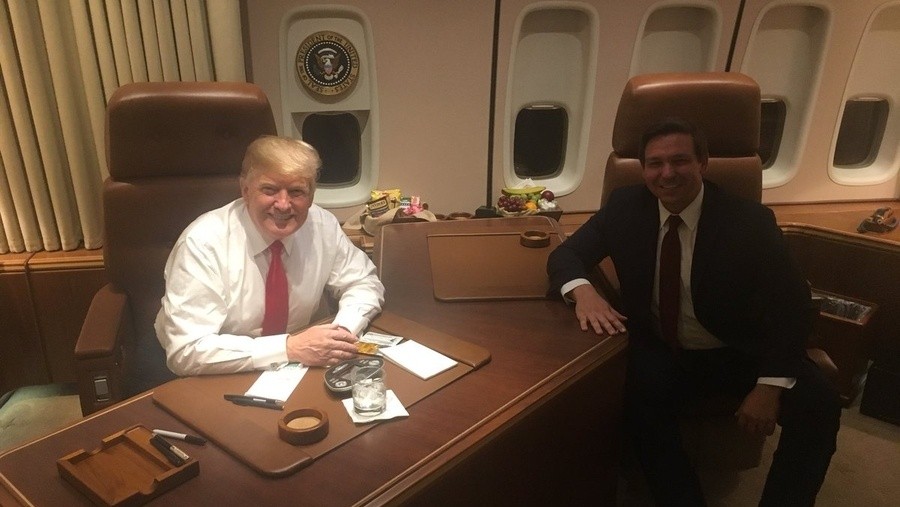 It shouldn't be much of a surprise that President Donald Trump is fawning over Florida Rep. Ron DeSantis, a guy who's actively trying to undermine Robert Mueller's investigation into the 2016 election.

This afternoon Trump tweeted, "Congressman Ron DeSantis is a brilliant young leader, Yale and then Harvard Law, who would make a GREAT Governor of Florida. He loves our Country and is a true FIGHTER!"

Congressman Ron DeSantis is a brilliant young leader, Yale and then Harvard Law, who would make a GREAT Governor of Florida. He loves our Country and is a true FIGHTER!

DeSantis responded to Trump's social media back rub with, "I’m grateful to have @realDonaldTrump’s support & appreciate what he has done — from appointing great judges to recognizing Jerusalem as Israel’s capital to signing a pro-growth tax cut — to get our country back on track."

Yes, DeSantis. Very excellent judges indeed, like the one that just withdrew his nomination because he couldn't answer a single basic law question. Also, never mind that the United Nations overwhelmingly condemned Trump's Jerusalem decision, or that the tax bill increases the debt by a trillion dollars and will be paid for by cutting vital programs like Medicare, Social Security, and food stamps. MAGA!

The Republican congressman has not officially declared his candidacy for Florida governor. However, Adam "Baby Trump" Putnam has, and he's spent most of the past year kissing the ring of his orange overlord.

Let's see what he's been up to today:

From our family to yours, have a very Merry Christmas. pic.twitter.com/spJceJoQCX

It's hard not to feel bad for Putnam, he's been on the Trump train this whole time. His slogan "Florida First" is basically a rip off of Trump's "America First" punchline. He called himself a proud NRA sellout. He got caught bullshitting about illegal immigrants voting.  He even sent out weird little petitions calling for support of Trump's Twitter tantrums over athletes raising awareness of black people being disproportionately killed by police.

NFL owners have decided NOT to address the national anthem protest. Tell us what you think of their decision. https://t.co/k4T8dtKdq5