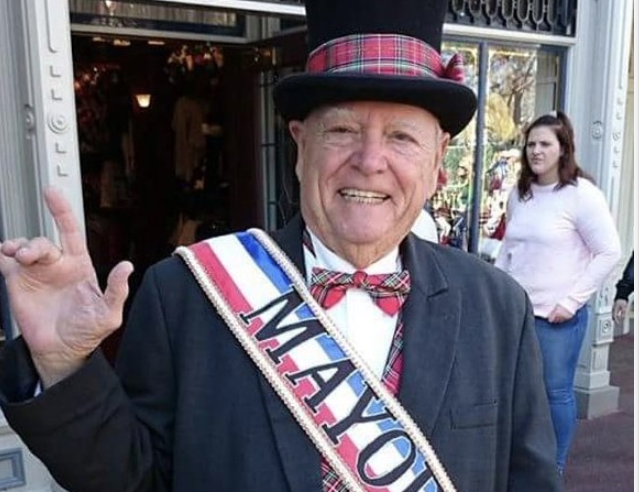 After more than two decades the re-election campaign of Main Street Mayor George Weaver has come to an end. The well-known Magic Kingdom streetmosphere actor passed away on Christmas Eve at the age of 84.

The Florida native has a performing career stretching more than 60 years including stints in New York City, the Poconos, and Norwegian Cruise Lines, where he served as a Cruise Director. According to Attractions Magazine, Weaver began his career at Disney World as part of the opening cast for the Indiana Jones Epic Stunt Spectacular. After serving as the Director on that show, he moved over to Epcot where he became the Fife and Drum Band’s Crier.

By the late 1990’s Weaver was proudly serving as the “Honorable Mayor of Main Street USA.” Like a president filing for his re-election on the day he’s sworn into office Weaver was known for his mayoral campaign which he promoted with his catchphrase slogans “Pull the Leaver, Vote for Weaver!” and the promise “The best mayor money can buy!” Keeping with the tongue in cheek corrupt politician theme Mayor Weaver would hand out business cards that stated "Campaign contributions gratefully accepted at any hour of any day. Quid pro quo."

He was best known for leading the Magic Kingdom Welcome Show that opened the park each morning.

In recent years, Disney has cut back or changed out the streetmosphere entertainment in the parks including Main Street Reporter Scoop Sanderson. Along with Scoop, George Weaver regularly performed alongside Mark Miller, Fire Chief of Main Street USA. That character seems to be still performing at the park, but there’s no word on if Disney plans to replace its first and only Magic Kingdom Main Street USA Mayor. 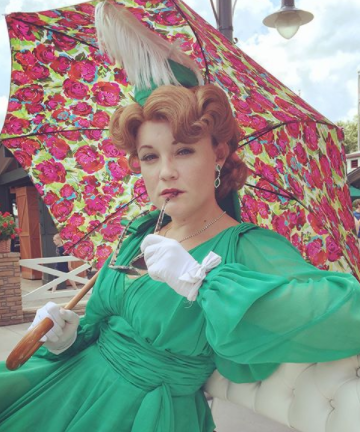 Just days after Weaver’s passing another iconic streetmosphere actor, Stacy Fulford, also passed away unexpectedly. Famous for the Citizens of Hollywood character Mimi Kaboom at Disney’s Hollywood Studios Fulford also regularly performed as Helga, the German storyteller at Epcot’s Holidays Around the World. She was also active in the community theater. She also loaned her voice to Vol, the volcano Tiki god that resides inside Krakatau volcano at Volcano Bay.

Fulford began as a Citizen of Hollywood in 2013, one of her more well-known acts was her ‘Auditions for a Husband’ where she would recruit park guests in an attempt to find the perfect husband. To honor her legacy, the Citizens of Hollywood hosted a pie-eating contest and small memorial for her this past Saturday.