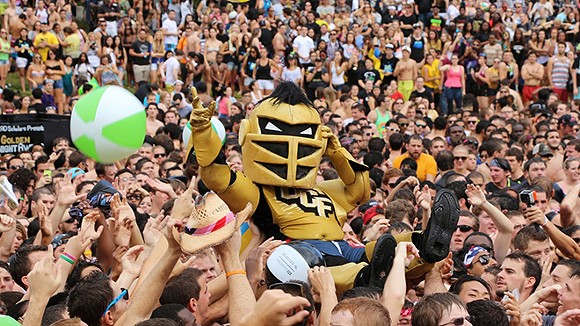 In the latest nod to the University of Central Florida’s undefeated season, the City of Orlando and UCF announced their plan today to throw a “national championship” party in downtown Orlando next week.

It’s the latest celebration after UCF topped Auburn University in the Chick-fil-A Peach Bowl earlier this week, with a score of 34-27. Prior to that, UCF clinched an undefeated regular season and a win over No. 20 ranked University of Memphis in the American Athletic Conference Championship Game, making the Knights the only undefeated team in FBS college football.

Since then, after watching the University of Alabama and the University of Georgia claw their way into a chance to compete for the (real) national championship, Knights football fans have continued to self-induce the euphoria that comes with winning it all. The downtown party, along with a parade and a championship banner to hang on UCF’s stadium, are the latest additions to the ongoing celebration.

Orlando Mayor Buddy Dyer also plans to present the UCF Knights with a “Key to the City,” according to a news release from the mayor’s office.

“We are proud of Orlando’s hometown team and hope fans from across Central Florida will come out to celebrate this memorable season,” Dyer says in the release.

UCF athletic director Danny White adds, “As Orlando’s hometown team, we’re looking forward to celebrating with our community on Monday night. Thanks to the City of Orlando and Mayor Dyer for helping make this national championship celebration special for our student-athletes and fans.”

The family-friendly event will begin at 6 p.m. on Monday and will include a pep rally, a national championship celebration and “much more,” according to the release.