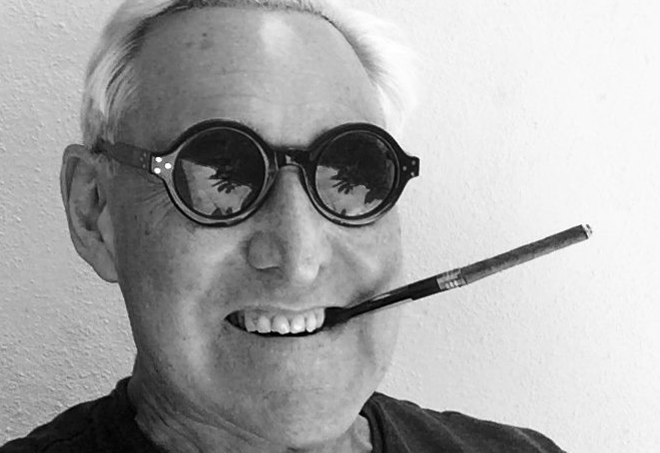 Infamy comes in many forms — the good, the bad and, in this case, Roger Stone.

Stone was the guest speaker for the month of January at the Tiger Bay Club of Central Florida. Standing in front of a drooping American flag, with a packed room listening, Stone touched on issues ranging from how he doubts the truth behind journalist Michael Wolff's new book about the Trump administration to his frustration with U.S. Attorney General Jeff Sessions' decision to rescind the Cole memo — an Obama-era policy of non-interference with marijuana-friendly state laws.

It was a sprawling talk on Stone's part — what could be called "coherent rambling," albeit with his signature libertarian idealism and a touch of the humorous charm that has in part fueled his career.

Stone, a longtime political operative and former campaign advisor to Trump, has been a staple — and, for many, a thorn in the side — of American politics for more than four decades. Often referred to as a "dirty trickster," he has extended his influence to both successful and unsuccessful presidential campaigns, including former president George H.W. Bush's and 1996 Republican presidential nominee Bob Dole's. Among many other notes of achievement, he’s also a frequent contributor to the conspiracy theory-peddling talk show, InfoWars.

The political consultant and lobbyist's résumé was enough for Netflix to profile him in a recently released documentary, Get Me Roger Stone.

Stone took the time to speak with reporters after his talk on Friday. When asked about his expectations for when Special Counsel Robert Mueller might bring charges against the president, Stone said, "Almost immediately."

"Here's my supposition: General Flynn has said that he was directed by a senior member of the presidential transition to contact the Russian ambassador to set up a meeting,” Stone says. “There would be nothing wrong with that contact; that’s his job.”

Stone then mentioned how Jared Kushner, a senior advisor to the Trump administration and the president’s son-in-law, gave testimony to congressional investigators looking into Russia’s interference into the 2016 presidential election. In Stone’s opinion, that same “senior member of the presidential transition” could very well be Kushner.

“During the course of that interview, did [Kushner] deny or dissemble about that? If so, [Kushner] could theoretically be charged with lying to an FBI agent, which is slightly different than being charged with perjury,” Stone says.

“If that’s the case,” Stone continues, “[Mueller] could bring a charge against Kushner as he brought charges against General Flynn.”

Stone says that move on the special counsel’s part could “goad the president into firing Mueller,” which he believes would cause a “firestorm,” and therefore could be the next step to what Stone believes will be Mueller bringing a process of charges against the president.

“Also, in this case the context is different. Remember, the president’s lawyers have been sharing with him that he’s going to get a letter from Mueller clearing him of collusion with the Russians,” Stone says.

And Stone’s right. First they said it would all cleared up by Thanksgiving, then by Christmas and then by the end of the year. Now, the latest word is likely sometime in February.

Stone says he doesn’t believe any sort of letter will ever arrive in the president’s mailbox, so to speak.

“Therefore, I think, in a way the president’s lawyers are sleepwalking him into the charge that I referred to,” Stone says. “Some bogus, pardon the expression, trumped-up process charge.”