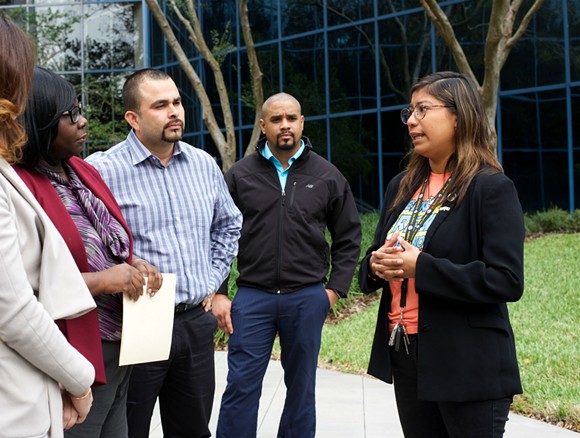 Orlando activists and undocumented youth were outside the offices of U.S. Sen. Bill Nelson and Rep. Stephanie Murphy on Monday demanding both lawmakers block future spending bills that don't include a clean DREAM Act.

Both lawmakers are among several Democratic legislators who have faced a progressive backlash after a Dec. 20 vote approving spending bill to keep the federal government open and avoid a shutdown. Many Democrats vowed not to support a spending bill unless it includes deportation relief for undocumented youth and immigrants with Temporary Protected Status (TPS) designations. Recipients of the Deferred Action for Childhood Arrivals (DACA) program have been in limbo since September when the Trump administration officially rescinded the program. Undocumented youth have been calling on Congress to pass a "clean" DREAM Act that doesn't include provisions to increase funding for immigration enforcement, build a border wall or expand the private prison and detention centers system. Locally, activists are also asking Nelson to support the Trust Act ordinance by writing a letter to the Orlando City Council.

Karen Caudillo, one of about 33,000 DACA recipients in Florida, says her DACA permissions expire in 10 months, and she's scared to lose everything she has worked so hard for.

"We urge Sen. Bill Nelson to step into our shoes," the University of Central Florida student says at a Monday press conference. "How many of us around Orlando will have to go back into the shadows and live in fear? … Please stand on the right side of history and not with the white-supremacist agenda that is being spread right now."

Kevin Ortiz, another DACA recipient who graduated from UCF last December, says he knows Nelson has supported undocumented youth in the past by presenting their stories on the Senate floor, but when it came down to it, he voted against the recommendations from the immigrant community.

Ryan Brown, a spokesperson for Nelson's office, says the Florida senator is "a co-sponsor of the DREAM Act and is fighting hard to make it law." Staff from Nelson's Orlando office came out to receive a letter from activists on Monday.

Last month, a spokesperson for Murphy said that although the Winter Park congresswoman is a steadfast supporter of "Dreamers" as a refugee and immigrant herself, "shutting down the government would put millions of seniors, veterans, children, and many other vulnerable populations at risk – depriving them of critical federal resources."

Rasha Mubarak, the Central Florida regional director for the Council on American-Islamic Relations in Florida, says activists are urging Nelson to take an "unshakeable" stance on immigration policies.

"That means unequivocally supporting our Dreamers," she says. "At the end of this month, it will be the one-year marking of the Muslim ban. So we caution our elected officials from supporting division and discriminatory polices that include the militarization of the U.S. border and supporting anti-immigrant legislators. We cannot continue to be silent."

Caudillo says it's "discouraging" to have to spend time convincing Democratic lawmakers to support undocumented youth.

"We used to think the Democratic Party was always on our side, but now we have to be out here holding them accountable," she says. "It feel like we're in limbo and neither side wants to come out and support us. … We can't wait any longer. Delays mean deportations."