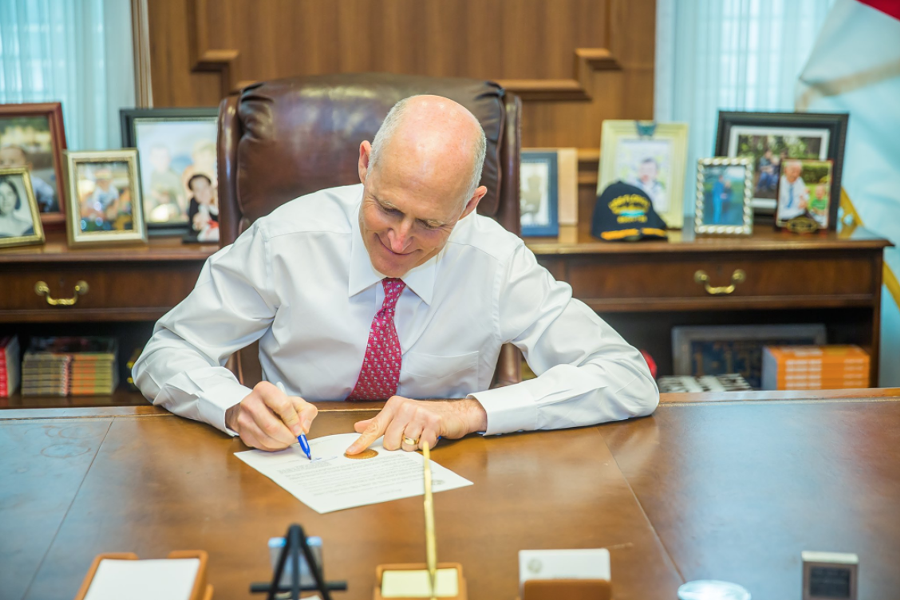 As if the pandemonium surrounding the University of Central Florida’s football team wasn’t already through the roof, Scott issued a proclamation today declaring the Knights as “national champions in Florida” after their undefeated season.

UCF rounded out their 13-0 season early last week with a 34-27 win in the Chick-fil-A Peach Bowl against the Auburn University Tigers. The Knights, then ranked No. 12, had previously clinched an American Athletic Conference Championship against the No. 20 ranked University of Memphis Tigers last month, making them the only undefeated team in FBS college football by the season’s end.

(Memphis was the only ranked opponent on UCF’s schedule in 2017. The College Football Playoff Committee — a group of 13 current and former coaches, athletic directors and administrators that convene each week to rank the top teams — take strength of schedule into close consideration.)

“Florida is home to the country’s best college football, and this season, UCF proved to the world that they can beat any team,” Scott says in a news release, without mentioning how the game between UCF and the Georgia Tech University Yellow Jackets was cancelled due to Hurricane Irma making landfall in September. “By having a perfect season and beating the only team that defeated both [the University of] Alabama and [the University of] Georgia this season, the UCF Knights are clearly champions. I wish both teams good lucky tonight in Atlanta. Charge on.”

“Clearly” they were the best college football team in the country, as Scott suggests, especially in the age of post-fact revelations – but let’s take a closer look at the technicalities of the governor’s statement.

In terms of being the best college football team in the nation, that remains unclear. The actual championship game, which takes place tonight, usually decides that much. However, it could be argued that UCF was actually the best college football program in the state of Florida this season, at least in terms of how each team’s records faired on paper, which is a feat in itself considering the state's rich history with the sport.

The University of Florida Gators finished with an abysmal 4-7 record this season – the program’s worst since 1979.

Further north, in Tallahassee, the Florida State University Seminoles finished out their season with a 7-6 record – their worst since former head coach (and patron saint) Bobby Bowden’s first year with the ‘Noles, in 1976.

And, out west, the University of South Florida Bulls wrapped up 2017 with an 11-2 record – with one of the aforementioned losses coming at the hands of UCF to close out the regular season.

Those are the records for every significant (or somewhat significant) FBS college football program in Florida, and yes, that means UCF finished with the best record out of all of the above.

But is it enough to say that UCF was the better college football program in the country?

Going further, the UCF football team was paraded through Disney’s Magical Kingdom on Sunday, a championship banner is reportedly to be hung in UCF’s stadium and a championship celebration is taking place in downtown Orlando tonight.

But what does history have to say about whether UCF is the best team in college football in 2017?

Just drawing from one example, the University of Houston Cougars finished with an nearly undefeated season in 2015, with a 13-1 record, but actually still wound up ranked higher than UCF was this season. That same year was the second in the playoff-era of college football, too, and Houston didn't make the cut for the top-four teams either due to the fact that smaller schools and strength of schedule come into consideration — and Houston even went as far as to beat Florida State in the Peach Bowl that season, such as what UCF accomplished this year against Auburn.

What does this all mean?

It means nothing, quite frankly. But if it were to mean anything, it would be that moral victories are victories nonetheless.

WHEREAS, the University of Central Florida (UCF) Knights won the American Athletic Conference Championship by beating the Memphis Tigers, 62-55, on December 2, 2017; and

WHEREAS, on January 1, 2018, the UCF Knights completed an undefeated football season by beating the Auburn Tigers in the Peach Bowl, 34-27; and

WHEREAS, the UCF Knights are the only undefeated team in NCAA Division I football this season; and

WHEREAS, the College Football Playoff final on Monday, January 8, 2018, is between the Alabama Crimson Tide and the Georgia Bulldogs, who both lost to the Auburn Tigers, who lost to the UCF Knights;

NOW, THEREFORE, I, Rick Scott, Governor of the State of Florida, do hereby proclaim that the UCF Knights are this season’s best college football team and will be recognized as the 2017 College Football National Champions in Florida.

IN WITNESS WHEREOF, I have hereunto set my hand and caused the Great Seal of the State of Florida to be affixed at Tallahassee, the Capital, this 8th day of January, in the year two thousand eighteen.